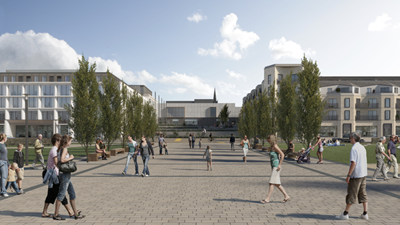 Wide ranging proposals to develop Bangor’s Waterfront and Queen’s Parade will enrich and transform the lives of the people living in the town, create sustainable jobs and help Bangor cement its reputation as a great place to live, work and visit, Wayne Hemingway has told an online event.

The founder of Hemingway Design, who, working with AECOM, has developed plans to reinvigorate a stretch of Bangor Waterfront, said the proposals are aimed at enhancing Bangor’s seafront by seamlessly connecting it to the rest of the town while also “providing a mix of public spaces, creative events, activities, attractions and experiences that speak of local stories to a global audience”.

Mr Hemingway was speaking as part of a Renewed Ambition series of webinars looking at the opportunities that the Belfast Region City Deal presents. He outlined trends in a number of waterfront projects across the UK and how the regeneration of seaside resorts in particular can deliver economic and community renewal.

The plans for Bangor Waterfront include investment in new and improved public realm along a two-mile stretch; opening up of space around Bangor Marina and redevelopment of Bregenz House, enhancement of Pickie Family Fun Park; the creation of the Ballyholme Yacht Club and Watersports Centre as a state-of-the-art destination for sports and events and building on Open House Festival’s plans to repurpose Bangor Court House into a premier music and arts venue.

Running in parallel is Queen’s Parade, a £50 million mixed-use development by the private sector. The proposed scheme, developed by Bangor Marine Ltd (a partnership between Karl Group and Farrans), will see extensive improvements to the run down area of Bangor including new homes, a hotel, public realm scheme, events space and cafes/restaurants and offices. Ards and North Down Borough Council’s Planning Committee gave their approval at a meeting on Tuesday 26 January 2021.

Wayne Hemingway, Founder of Hemingway Design, said: “Bangor’s Waterfront is an amazing asset, not just for the town but for the whole of Northern Ireland, and we want it to be rightfully celebrated. The plans which we have outlined are aimed at making the very most of this beautiful coastline, tying it back into the town so it is a focal point accessible to everyone.

“Our proposals stretch to two miles of coastline, along which there are enhancements and attractions to ensure inclusive development for the benefit of residents, for visitors and for businesses in the town. Combined with the plans for Queen’s Parade and the partnership with the Open House Festival and their regeneration of the Old Court House, these plans offer a compelling look into the future for Bangor which will enrich the lives of everyone in and around the town.”

Aran Blackbourne, from Bangor Marine, said: “By bringing people to live in the town centre and providing new leisure, hospitality, workplace and tourism opportunities – all connected into the vision for Bangor as a unique place to regenerate ‘mind, body and soul’ – our ambitious plans dove tail with the Bangor Waterfront regeneration. Our plans are focused around making Queen’s Parade a place for the local people and visitors to once again love, as well as having sustainability at their core. We look forward to making them real.”

Stephen Reid, Chief Executive of Ards and North Down Borough Council, said: “We have the opportunity to transform Bangor for this and many generations to come. These plans will collectively deliver more than £110m of investment into Bangor over the next 5 to 10 years.  They aim to enhance the town’s bountiful assets through targeted and subtle investment that will benefit everyone. The vision is to create a necklace of waterfront development that will drive economic and community wellbeing.

“As a Council we are hugely excited by the positive future that these plans offer to people in Bangor and beyond.”