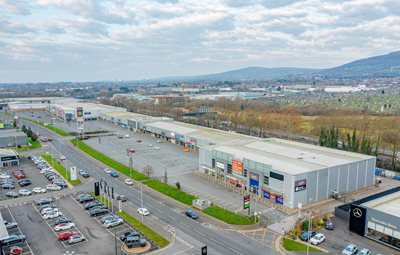 The retail group led by tycoon Mike Ashley has snapped up a major shopping park in south Belfast.

The retail park is home to major retailers including B&M, Superdrug, Greggs, Boots, Next and TK Maxx.

Frasers said the deal demonstrated its commitment to bricks and mortar retail. The retail park had not been advertised for sale and no purchase price has been disclosed.

Head of property, James France said: “Boucher Road is widely regarded as the key strategic out-of-town retail destination in Northern Ireland. Boucher Retail Park sits at the heart of this, offering an unrivalled retail line-up to its customers.

"Over the past two years, the group has been investing heavily into the Irish market, with a business-wide commitment of over 500,000 sq ft of retail space across all fascias.

"This acquisition not only bolsters our commitment to the Irish market but allows us to further invest and modernise this asset into an aspirational shopping destination.”

Mr Morrison added: “I wish Frasers Group every success in what is one of the best shopping parks in Ireland.”

The Ballymena man became one of Northern Ireland’s best-known property developers and is a former owner of Fairhill Shopping Centre in the town.

He also owned Boucher Road’s Shane Retail Park and Cityside Retail Park until their sale in 2014 to US fund Marathon Asset Management.

Shane Retail Park was put on the market last year for £19.7m and bought by English business David Samuel Properties for £23m.

The purchase of Boucher Retail Park is the first acquisition for Frasers Group in Northern Ireland since the business formerly known as Sports Direct bought House of Fraser stores out of administration in 2018.