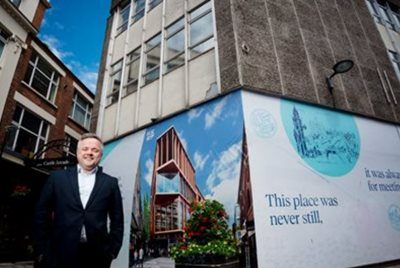 A number of major planning applications in the city centre have been given the green light this month following Belfast City Council’s Planning Committee’s meetings in June.

These include plans to make alterations to the former British Home Stores (BHS) building on Castle Lane in the city centre, the development of over 90 social homes on the Gasworks site and construction of a new hotel in the Cathedral Quarter.

Approval was granted at the former BHS site for re-cladding of the exterior building and a reconfiguration of the ground floor space into retail units with upper floors being changed to allow for leisure uses. Changes will also be made to internal staircases and walls and demolition will take place to the bridge link over Castle Arcade. The proposal represents an investment of £10million and will create up to 150 construction jobs.

Permission was also granted for a mixed-use development at the Gasworks Northern Fringe site in the city. This will include a hotel, residential space, offices, retail units and a multi-use car park comprising up to 231 spaces. The application at the Gasworks also gave permission for the erection of 94 social housing dwellings, along with the provision of landscaping, parking and a public open space.

The development of a new 164-bedroom hotel on the corner of Waring Street and Victoria Street was also approved. The Moxy hotel will be built on the site of the old Nambarrie Tea Factory with the £25 million investment project set to retain much of the building’s original structure and character. It is expected to create 30 full time jobs when completed.

Planning Committee Chair Councillor Carl Whyte said: “This month has seen the approval of a number of significant projects, each of which will play a small part in the revitalisation of our city’s streets and buildings whilst also providing new social homes for families to live in. Additional investment and construction projects like this deliver improvements to our city and are vital to ensure Belfast reaches its full potential.

“I am delighted to lend my support to projects like this and look forward to following their progress during construction.”