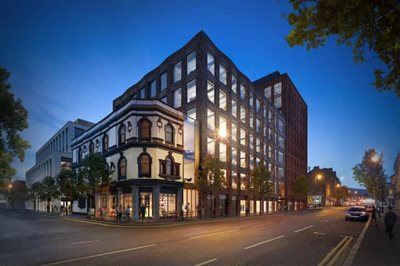 Bywater and Ashmour announced plans to submit new proposals to build more than 500 student units at the site, rather than the three office buildings.

Bywater Properties and Ashmour Developments have announced their intention to submit proposals for a major student accommodation development on a site in Belfast that was previously earmarked for offices.

Plans were previously approved by Belfast City Council planners for an office-based scheme on land currently used as a surface car park between Gresham Street and Winetavern Street in the Smithfield area of the city.

Having received planning permission for the original scheme in 2019, Bywater and Ashmour announced plans to submit new proposals to build more than 500 student units at the site, rather than the three office buildings which were at the centre of its first application.

The new plan seeks to create a high-quality scheme that will help meet the growing need for accommodation from students attending Queen’s University, Belfast and the New York Street campus of Ulster University, which is now home to around 15,000 students.

The pre-application notice filed with planners is for a 226,200 sq. ft building which will contain 583 student bedroom units.

As with the previous scheme, the plans include active ground floor uses to animate the street and allow for an eclectic mix of small independent local businesses, retailers, cafes and social enterprises, which will contribute to the further regeneration of the Smithfield area.

Bywater’s proposals also cover the retention and ongoing revitalisation of the listed Butcher’s Building on the corner of Gresham Street and North Street, recently home to a range of independent businesses supported by Bywater and Ashmour. The developers are also in the process of refurbishing a number of the older terraces on Winetavern and Gresham streets, with a number of discussions being held with potential occupiers.

The project is expected to create up to 350 construction jobs in the build phase of the project.

Patrick O’Gorman, principal of Bywater Properties, said: “We really loved the Smithfield Yard scheme which we brought forward in 2019, but with working patterns changing post-pandemic and plenty of other high quality office stock coming forward in Belfast we see greater need in this area for new high-quality city-centre accommodation to support the growing student demand.

“The new Ulster University campus at York Street has brought a new vibrancy to this part of the city, but many of the students attending the campus are having to live a significant distance away in other parts of the city because of a shortage of student apartments.

“Queen’s University also expects demand for new accommodation to grow significantly in the next few years. We believe we are well placed to help meet some of that need and are excited to bring forward a proposal that will contribute to the regeneration of this part of Belfast by using the vibrancy of the student community to help support a renaissance of the traditional small shops and businesses in the area.”

A consultation on the new proposals will be held in the first quarter of 2023 to hear feedback from people in the local area.