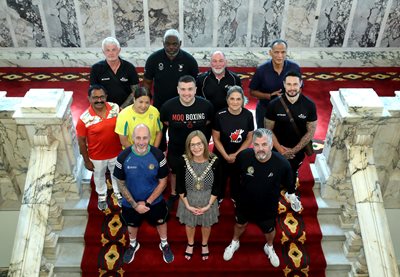 Belfast’s first citizen has hailed the Belfast Boxing Strategy “a major success for the city”.

Councillor Christina Black made the comments as she welcomed boxing coaches from nations across the Commonwealth to City Hall today (Tuesday 19 July).

The 22nd Commonwealth Games take place in Birmingham this month, and the coaches along with their fighters were in the city for a pre games training camp.

Amongst the group were coaches representing clubs across Belfast, who are now part of the Northern Ireland- coaching team. They will corner for 13 fighters at the games, with seven of those benefitting directly from activities and programmes delivered through, Boxing Strategy – of which Belfast City Council is a key funder.

The Lord Mayor said she believe Council’s commitment to investing in the sport is paying off.

“The council gave a commitment to support the growth and development of boxing in our city and wow has it paid off,” said Councillor Black.

“The visit of these local coaches to City Hall today, before they head to Birmingham to guide their fighters competing on the world stage, is a shining example of how council’s investment in local grass roots sport is paying dividends.

“Not only is the boxing strategy supporting high performing elite athletes, but it has also encouraged more young people to get involved in the sport. The benefit of physical activity to improve our overall health and fitness cannot be understated and it’s fantastic to see increased participation in the sport of boxing, particularly amongst young girls.”

She added: “Belfast is a boxing city and has a rich history of boxing success. I have no doubt the group travelling to Birmingham will do their families and city proud as they compete for gold. The boxing strategy has been a major success for the city, and I look forward to the delivery of greater achievements in the future.”

The boxing strategy was first developed in partnership with County Antrim Boxing, Ulster Boxing Council, Sport Northern Ireland, and the Irish Amateur Boxing Association with the aim of growing amateur boxing in Belfast.

In the last quarter alone, the strategy successfully delivered some key performance figures. These included –

For more information about Boxing in Belfast visit www.belfastcity.gov.uk/boxing