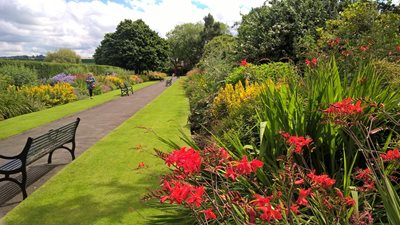 Twenty parks and open spaces in Belfast have picked up coveted Green Flag Awards once again, this year.

The awards were announced recently by environmental charity, Keep Northern Ireland Beautiful, and are an internationally recognised certification for environmental quality management for parks and open spaces.

Botanic Gardens also received a special Green Flag Heritage Award once again, this year. This accolade is presented for sites which make the most of their unique heritage features and enhance the visitor experience.

Dr Ian Humphreys, Chief Executive of Keep Northern Ireland Beautiful which manages the local Green Flag Awards programme, said: “Urban parks are one of the Victorian era’s great achievements and their relevance and importance continue today. Communities across the country value their local parks enormously and their potential to support biodiversity is being increasingly recognised. They’re not just spaces for us, they’re spaces for nature.

"When you visit a Green Flag site, you can be reassured that the location is being managed to a really high standard as they’ve been through a rigorous judging process that assesses sites across a range of issues including their horticultural standards, cleanliness, biodiversity and safety.”

Find out more about the 2022 Green Flag Awards at www.keepnorthernirelandbeautiful.org

For more information on our parks and open spaces in the city, visit www.belfastcity.gov.uk/parks