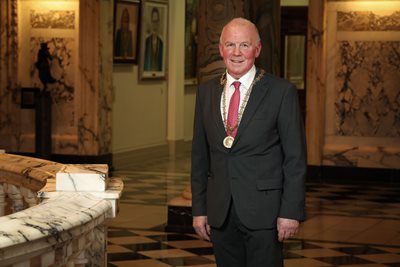 East Belfast Councillor John Kyle has been appointed as the new High Sheriff of Belfast.

East Belfast Councillor John Kyle has been appointed as the new High Sheriff of Belfast.

A member of the Ulster Unionist Party at Belfast City Council, he replaces DUP Councillor, Alderman John Hussey as the 123rd High Sheriff of Belfast.

Looking ahead to his year in office, Councillor Kyle said; “I’m absolutely delighted to be appointed as the new High Sheriff of Belfast.

“It’s a tremendous honour to be appointed to such a prestigious role and I’m looking forward to a busy year in office supporting the work of the Lord Mayor and Deputy Lord Mayor throughout 2023.”

A former GP, Councillor Kyle was first co-opted on to Belfast City Council in 2007. He was then first elected to the council in 2011.

Representing the Titanic District Electoral Area, he has served on many council committees including City Growth and Regeneration as well as many external bodies such as the Eastside Partnership Board.

Historically, the role of High Sheriff has been ‘protector of the monarch`s interests’: however, it is now largely ceremonial and - since 1973 - the appointment has been made by the Secretary of State, based on a nomination from Belfast City Council.

The High Sheriff will take up office for a full calendar year, from January through to December.

For more information visit www.belfastcity.gov.uk/council and find out more about the High Sheriff role