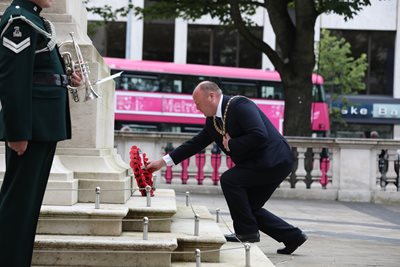 Lord Mayor of Belfast, Alderman Frank McCoubrey laid a wreath at the Cenotaph today (Saturday 15 August) in the Garden of Remembrance at Belfast City Hall to commemorate the 75th anniversary of VJ day.

VJ (Victory in Japan) Day on 15 August represents an important milestone in world history as it was on that day – 75 years ago – when the war against Japan was ended, bringing an end to the Second World War.

Following the wreath laying ceremony Belfast’s first citizen alongside his chaplain the Reverend Tracey McRoberts took part in the U.K wide two minute observance of silence at 11am to remember and thanks all of those who fought and lost their lives during the war effort.

Reflecting on the day’s events, Alderman McCoubrey said: “It is important that we take time to commemorate such a significant moment in world history and pay tribute to all those who made the ultimate sacrifice for the benefit of others.

“The impact of the war was felt at a very local level here in the city as there were many Belfast born soldiers who fought so bravely in World War Two. We also have a very significant monument within the grounds of City Hall erected to the memory of James Joseph Magennis who was the only solider from Northern Ireland to be awarded with a Victoria Cross for his acts of courage during the war effort.

“We will forever be indebted to the efforts of those who fought so bravely which allows us to enjoy the freedoms we experience today. I am delighted that we were able to pay our respects with today’s events.”