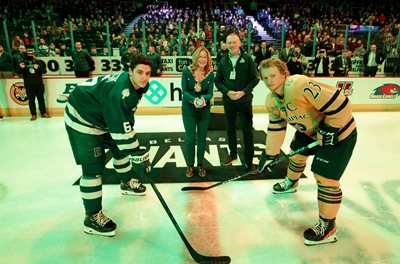 Schoolchildren from across Belfast joined thousands of spectators and hockey fans to cheer on top U.S. college ice hockey teams today, as the prestigious Harness Friendship Four tournament got underway at The SSE Arena, Belfast.

Over 1,000 local schoolchildren visited W5, ahead of the opening game, to take part in W5’s Big STEM Day in association with Microsoft, enjoying access to over 250 interactive exhibits, workshops and science shows, aimed at engaging and inspiring young minds with all aspects of science, technology, engineering and maths.

Lord Mayor of Belfast, Christina Black led a procession of schoolchildren from W5 to The SSE Arena, before dropping the puck to officially open the Harness Friendship Four tournament for 2022 for the first game between Dartmouth Big Green and the Quinnipiac Bobcats.

Speaking at the opening game, Lord Mayor of Belfast, Councillor Christina Black said: “It’s my honour to officially open the Harness Friendship Four for 2022. It’s fantastic to see the return of this prestigious tournament to Belfast. Building on the strong foundations of our Sister City agreement with Boston, the tournament boosts our reputation for hosting major sporting events in the city.

“Once again, the tournament has brought young people from communities from right across Belfast together, to enjoy memorable days out, with the opportunity to see first-class ice hockey talent, and future stars in the making, on the ice in Belfast. It’s been really uplifting to see and hear the excitement of so many young people here today.”

The Friendship Four was born in 2015, following the Belfast Boston Sister Cities agreement in 2014, helping to build links between the two cities through the medium of sport. The highly popular international ice hockey tournament, created and developed by The Odyssey Trust continues to grow to this day.

Speaking at the opening game, Martin McDowell, Chairman, The Odyssey Trust said: “It is incredible to see the excitement on the faces of young people and fans, as we come together to welcome the return of the Harness Friendship Four for 2022. It is a great honour for The Odyssey Trust, and the city of Belfast as a whole, that this is the first and only NCAA (National Collegiate Athletic Association) Division One tournament to take place outside the United States.

“This year’s tournament will be our biggest and best yet, supported by an exceptional STEM learning and engagement and outreach programme led by W5, that will have far-reaching impacts for young people in schools and communities across Belfast, in keeping with the Trust’s aim to provide access to leisure and learning opportunities that improve life chances for the people of Northern Ireland. I would also like to thank our partners, Harness, Belfast City Council, Department for Communities, Cara Travel, Microsoft, Northern Irish Connections and Tourism Ireland, without whom, this tournament would not be possible.”

Tech company, Harness, is the headline sponsor for the 2022 tournament and W5’s Science and Discovery Month. Speaking at the opening game, Andrew Magill, Talent Acquisition Lead, Europe, Harness said: “We are proud to sponsor the Friendship Four and the associated programme of events that have been taking place in W5 in the run up to the tournament, as part of Science & Discovery Month. The highly anticipated return of these events has brought thousands of young people together to learn new skills and discover the combined power of sport and STEM in fun and engaging events and we are proud to have played our part.”

With an exceptionally high standard of hockey, local fans will see stars of the future compete in Belfast this weekend. Some of the young players who have competed in previous Friendship Four tournaments have gone on to progress into the NHL, whilst the tournament has also proven to be a strong scouting opportunity for the Belfast Giants. Current Giants Scott Conway, Jeff Baum and Matt Foley were first seen on Belfast ice, when they played for their college teams at the tournament.

The Belfast Giants team will be in attendance at tonight’s game between Massachusetts Minutemen vs UMass Lowell River Hawks, before hitting the road for away games versus the Guildford Flames on Saturday and Coventry Blaze on Sunday.

Limited tickets are still available for the remaining Harness Friendship Four 2022 games, via FriendshipFour.com and Ticketmaster.ie, priced at £10 for adults and £5 for children per game. A service charge and facility fee will apply to all ticket types.