The statutory basis for this function is contained within Article 11 of the Local Government (Miscellaneous Provisions) (Northern Ireland) Order 1995, which commenced on 15 March 1995. It provides for street naming, street numbering and the provision of street signs. It also gives councils the discretionary power to erect dual language street signs or secondary nameplates in a language other than English.

The legislation requires the council, in deciding whether and how to exercise its discretion to erect a street name in a language other than English, to have regard to any views on the matter expressed by the occupiers of premises in that street.

The European Charter for Regional or Minority Languages, to which the UK is a signatory, was taken into account when developing this policy, as was guidance published by the UN Special Rapporteur on the practical implementation of language rights of linguistic minorities. The council’s Language Strategy adopted by the council in May 2018 sets out the council’s commitment to establish a transparent set of principles for promoting, protecting and enhancing the linguistic diversity of the city.

The European Charter establishes an obligation on state signatories not to create barriers in respect of the use of a minority language. The UN Special Rapporteur guidance notes that the threshold where it is reasonable and practical to provide such signs varies between five per cent and 20 per cent of the local population. While this policy applies to all languages, the council recognises that Irish and Ulster Scots are recognised as minority languages in the European Charter.

For the purposes of this policy “occupiers” shall be taken to be any person whose name appears in the current Electoral Register plus the owners or tenants in actual possession of commercial premises, but not employees in such premises.

These policy proposals were developed in close consultation with the City Solicitor and are designed to promote consistent and reasonable responses. However, the policy should not be applied in such a way as to prevent due consideration being given to the particular circumstances of each application. See in particular Section 3(xi).

Having regard to the significant resource consequences of administering the implications of the policy, the policy will be reactive in nature. The policy will be managed and implemented based on the resources available and the established annual budget for street signage. The council reserves the right to pause the processing of applications in the event that resources are not sufficient.

The procedures for seeking and assessing the views of occupiers and the criteria to be applied in deciding whether to erect a street sign in a language other than English are as follows:

(i) Applications for the erection of a street sign in a language other than English must be made by an Applicant submitting an application form either by post or electronically to Belfast City Council.

Iii) An Application for the erection of a street sign in a language other than English may be made by an ‘Applicant’ which for purposes of this policy means:

(a) an Occupier or Occupiers of the street for which the application is made,
(b) an Elected Member of Belfast City Council who represents the District Electoral Area in which the street is located or
(c) a developer of a new street.

Any application submitted by a developer with regard to a new street will be considered by the council in accordance with Section 3(xi) of this policy. With regard to streets without any occupiers, applications for the erection of a street sign in a language other than English may only be made by an Elected Member who represents the District Electoral Area in which the street is located. The council will have regard to Section 3(xi) of this policy when considering any such application.

(iii) When an application is received, the council will canvass by post all occupiers of that street and seek their views on the request to erect a street sign in a second specified language.  Options for a response will be ‘Yes’, ‘No’ and ‘No Preference’. The council will note for its records those occupiers who do not reply. Reply will be by way of a pre-paid envelope and should be returned within one month of receipt.

(iv) Each survey that is sent out by the council to the Occupiers of a street for which an application is made will have a unique identifier number. Survey responses received by the council for that application will be cross-referenced against that unique identifier and will be recorded. The council may choose to audit certain responses to surveys. These measures are to provide assurance that each Occupier’s view is taken into account.

(v) Applications will be dealt with in the order that they are received.

(vi) Each application will be subject to a screening on equality, good relations and rural needs. This screening will commence when the application is received and will incorporate the results of the survey completed by the occupiers.

(vii) Where fifteen per cent or more of the Occupiers of that street have indicated that they are in favour of the erection of a second language street sign, then such a sign may be erected, subject to the residual discretion of the council as specified in subsection (xi).

(ix) A report on all applications (other than those ended in the circumstances specified in subsection (viii)) will be brought to committee for a decision.

(x) Consideration will to be given to “long streets” where opinion on whether to have a second language street sign may differ between readily identifiable, substantial lengths of the street.  In these circumstances, the decision as to the erection of dual language nameplates in certain portions of the street will be made by committee, exercising its residual discretion and taking into account advice from officers.

(xi) The council will retain a residual discretion to decide to erect or not to erect a street sign in a language other than English in certain circumstances. This will be done on a case by case basis. It may be appropriate to depart from the procedures in this policy when there are clear reasons for doing so. This may include taking into account:

(xii) The survey that is sent to Occupiers will include the name of the street as translated into the second language on the relevant application. The council will make the appropriate arrangements for the translation from English to that second language. The translation will be carried out by an independent, competent body such as the appropriate language department at Queen's University or other appropriate, independent and competent institution.

(xiii) With regard to the design and placing of the street signs the second language sign shall be located immediately below the English sign and the size of lettering shall be smaller than the English version to avoid any risk of confusion to the emergency services.

This policy was adopted by the council on (date to be inserted when policy receives council approval). 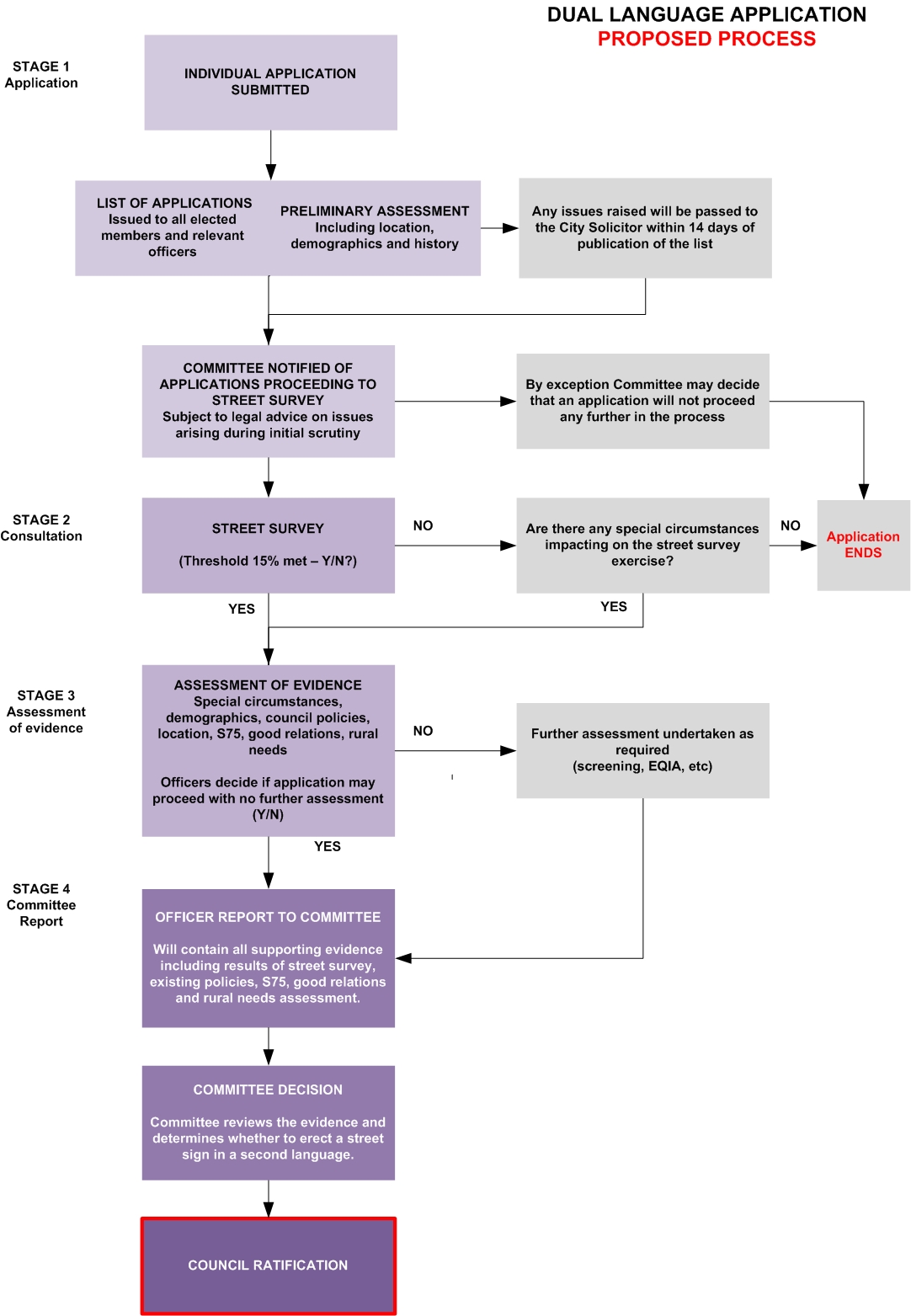