Whereas Belfast City Council (“the Council”) being the appropriate local planning authority within the meaning of Article 4 of The Planning (General Permitted Development) Order (Northern Ireland) 2015 (“the 2015 Order”) is of the opinion that development of the description set out in Schedule 1 hereto should not be carried out on the properties set out in Schedule 2 hereto all of which are sited within the Conservation Area of Malone Park unless permission is granted on application made under Part 3 of the Planning Act (NI) 2011.

And whereas the Council is further of the opinion that the control of such works is expedient in furtherance of the requirements of Article 104 of the Planning Act (NI) 2011 in that such works could threaten the preservation or enhancement of the character and appearance of Malone Park Conservation Area.

THIS NOTICE TAKES EFFECT ON THE DATE OF SERVICE:

An explanatory guide accompanies this Notice, however if you want further advice or guidance, please contact us directly at the address below, by phone on 028 9050 0510, or e-mail at planning@belfastcity.gov.uk

If you want independent advice about the Notice, you are advised to contact a lawyer, planning consultant or other professional advisor specialising in planning matters.

Land or premises at Malone Park, Belfast, edged blue on the accompanying map.

The following development shall now require planning permission in respect of the land described in the Second Schedule:

The properties to which this Direction applies are situated within Malone Park Conservation Area, and are contained within the area identified by the blue edging shown on the attached map. 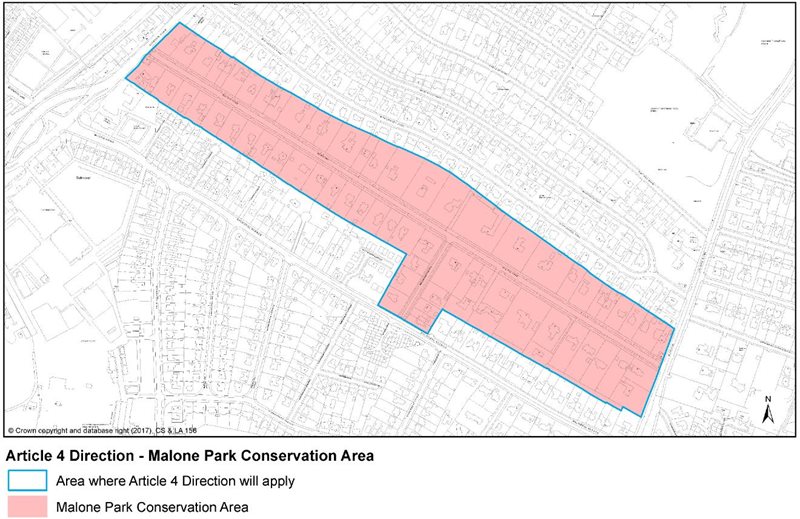