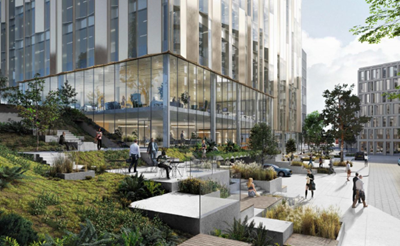 Members approved proposals for the £50m first phase of the landmark Belfast Waterside development and the £20m 11-storey Graham House development on Albert Square in the city centre.

The Belfast Waterside 28,476 sqm Grade A office scheme will bring an initial £50m investment and deliver the first major employment activity at the former Howden Sirocco site in almost 20 years, accommodating up to 2,500 employees.

A 13 storey office accommodation building, including a retail unit on the ground floor alongside café and restaurant units, will be the first step in creating modern workspace for 11.5 per cent of the 46,000 new jobs that Belfast City Council is seeking to create by 2035 as part of the Belfast Agenda. The plan also includes landscaping and public realm works, a pocket park and pedestrian and cycle access.

Councillor Matt Garrett, Chairman of Belfast City Council’s Planning Committee said: “The Belfast Waterside development will benefit both office workers and city residents – and act as a catalyst for the regeneration of the wider Sirocco site.

“The approach to the building’s design and landscaping has taken its cues from the Giant’s Causeway, and it’s exactly the type of high quality environment that we’re encouraging local and global investors to develop in Belfast, as we work to deliver our Belfast Agenda commitments, and to secure a Belfast Region City Deal with Westminster.”

The Committee also granted approval for a ‘Changing Places’ (CP) facility on the ground floor of Belfast City Hall. A CP facility is a combined toilet and shower changing room for use by people with complex and multiple disabilities who require the help of up to two assistants. It will incorporate a fixed track hoist system.

A new visitor centre for Belfast City Cemetery adjacent to the Whiterock Road was also approved.

Full details of Planning proposals considered by the Planning Committee are available at www.belfastcity.gov.uk/council and for monthly updates on planning decisions, follow @belfastcc #buildingbelfast on Twitter.