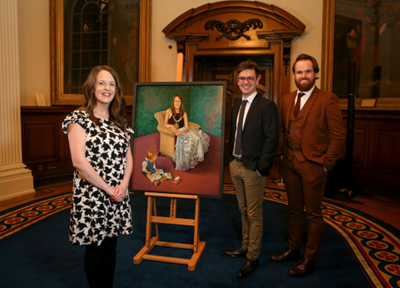 Belfast has been presented with a unique view of the former Lord Mayor, Councillor Nuala McAllister, after two artists collaborated on her official portrait unveiled today.

Belfast has been presented with a unique view of the former Lord Mayor, Councillor Nuala McAllister, after two artists collaborated on her official portrait unveiled today.

Lord Mayor, Councillor Deirdre Hargey, joined Councillor McAllister and the artists, Jamie Baird and Daniel Nelis, for the unveiling in the Reception Room.

“The idea for a collaboration was sparked during a visit to the University of Ulster’s Art School when I saw a lot of the wonderful work undertaken there and was later introduced to the artists, Jamie Baird and Daniel Nelis,” said Councillor McAllister.

“All of us were excited by the challenge we were undertaking and it was the thrill of trying something different that would capture the challenges and opportunities the Lord Mayor’s role represents.” added Councillor McAllister.

“It involved a lot of discussion between all three of us but I am delighted at the result and hope that both artists enjoyed the process as much as I did. The portrait perfectly reflects a memorable year in my life and the pride I took in serving Belfast as first citizen,” she said.

“My son Finn has been included because he was a very important part of that year and accompanied me to a number of engagements, especially those reflecting the emphasis on supporting families and opening City Hall to people of all ages,” added Councillor McAllister

The artists said the collaboration was something they hadn’t done or even thought about before and involved a lot of discussion as to how they could incorporate their different styles and vision before the portrait got underway.

Jamie Baird said: “Even though I am a graphic illustrator and collaborate regularly in that aspect of my work I hadn’t done the same thing before while working as an artist.

“The project took the best part of a year and involved a lot of back and forth between Daniel and I because we each wanted to accurately reflect Nuala and her fundamental values both as a person and Lord Mayor.

“I think we have done that and at the same time created something really unique,” he added.

Daniel Nelis said: “It has been a great honour to have been involved in such a unique opportunity. Despite initially having some reservations, the collaborative process of making this image revealed some valuable opportunities that could never have happened in isolation.

“It is far too easy to retreat into the comfort of what one is familiar with, yet the experience of working with Councillor McAllister and Jamie has been rewarding in ways only possible through a shared development.

“The result is an image that stands as an expression of the collaboration between all participants, and something wholly distinct from either of our respective work,” added Daniel.

Both artists have agreed a statement which will sit alongside the portrait and setting its themes in context.

The statement says: “Through the material selection, the painting aims to remain respectful of the tradition of the mayoral portraits, while at the same time acting as a representation of the progressive and youthful energy brought during Councillor McAllister’s term, the first young mother to be sworn in as Lord Mayor of Belfast.

“Respectively, the use of colour, the presence of the Cavehill native ash leaf and bluebell, and most significantly the presence of Councillor McAllister’s son, Finn, all strive to stand as an embodiment of Nuala McAllister as a public representative, as an individual, and as a mother.”