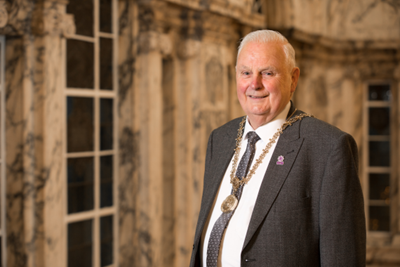 East Belfast Councillor, Alderman Tommy Sandford has been sworn in as the New High Sheriff of Belfast.

The DUP Councillor who represents the Lisnasharragh area of the city replaces Alliance Councillor Carole Howard as High Sheriff.

Alderman Sandford was appointed to the role by the Secretary of State following a nomination from Belfast City Council.

The 119th High Sheriff of Belfast, Alderman Sandford will be in position for a full calendar year, January through to December.

He said: “It’s an honour to be appointed as the High Sheriff of my beloved city. I will do my utmost to serve all the people of Belfast fulfilling the roles and responsibilities of this prestigious office to the best of my ability.”

As well as serving on various committees within Belfast City Council, Alderman Sandford is a representative on a number of outside bodies, including Avoniel Play Centre Committee, East Belfast District Policing and Community Safety Partnership, National Association of Councillors and Northern Ireland Local Government Association.

The first High Sheriff of Belfast was appointed in 1900 with the primary role of protecting the monarch’s interests in the city, but the role is mainly ceremonial now.