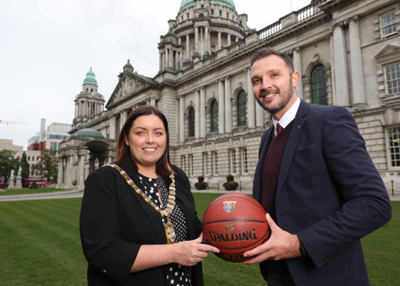 Lord Mayor of Belfast, Councillor Deirdre Hargey recently welcomed young basketball players and special visitors from the United States to City Hall, ahead of the 2018 Basketball Hall of Fame Belfast Classic tournament which takes place at the SSE Arena later this year.

In anticipation of the 2018 Basketball Hall of Fame Belfast Classic basketball tournament scheduled to take place at SSE Arena Belfast from 29 November to 1 December 2018, the Lord Mayor of Belfast, Councillor Deirdre Hargey recently welcomed young basketball players from across Belfast, as well as some special visitors from the United States to Belfast City Hall to learn more about the game.

Celebrating the continued partnership between this unique basketball event and Belfast City Council,  the Lord Mayor took time out of her day to visit with young basketball players from the Sport Changes Life Foundation’s eHOOPS programme, which has been designed to empower young people in communities across Belfast through the sport of basketball and mentorship opportunities, and the Foundation’s Victory Scholars, a group of American postgraduate students who have been selected by Sport Changes Life to study in universities across the island of Ireland while engaging with young basketball players at the grassroots level while also representing their university basketball teams.

"Last year, the event brought 10,000 spectators to the SSE Arena and was viewed in millions of homes in the US via CBS Sports Network coverage, generating around £750,000 to the local economy too.

“It builds on Belfast’s sister city and economic, tourism, youth, cultural and academic links with the US and I very much look forward to an exciting weekend of sporting action in the city from 29 November to 1 December.”

“From young primary school students to university players and post-graduate mentors using the sport to do good across Belfast and beyond, basketball is an exciting game which can bring together young people, build team skills, and improve the confidence and aspirations of young people.

"We are delighted to team up with Belfast City Council again in 2018 to inspire young people from across Northern Ireland to pursue their dreams – sporting or otherwise – to their fullest extent.

"Not only does basketball benefit its players, but families can also look forward to an exciting day out as spectators of the fast-paced tournament games which will be played in our own back yard at the SSE Arena Belfast from 29 November – 1 December,” added Marc Mulholland, Executive Director, Basketball Hall of Fame Belfast Classic.

Following an outdoor exhibition of free throws on the lawn of City Hall, the Lord Mayor invited tournament representatives to the parlour at City Hall for a reception, which included special guests from America, Paul Lambert, Vice President of the Naismith Memorial Basketball Hall of Fame and Michelle Perry, Tournament Director from the National Collegiate Athletic Association (NCAA).

They were in Belfast to finalise details of the world-class basketball tournament which will see thousands of basketball players, coaches, support staff, pep squads, supporters, friends and family arrive in Belfast to support their teams as they go head-to-head to claim the coveted Belfast Classic Cup.

Remarking on the warm welcome received by American visitors to Belfast for last year’s Belfast Classic, Gareth Maguire, CEO, Sport Changes Life said, “We have had significant feedback from the hundreds of players, coaches, fans and families who followed our four teams to Belfast for the inaugural Basketball Hall of Fame Belfast Classic on the welcome they received while visiting Northern Ireland in 2017.

"Not only were fans and players made to feel at home during their stay, but they also had the opportunity to take in some of Belfast and Northern Ireland’s famous attractions during their visit.

"Belfast City Council played a crucial role in ensuring that visitors to the tournament felt that world-renowned hospitality that throughout the weekend.”

Following the success of the inaugural Basketball Hall of Fame Belfast Classic in December 2017, the popularity of basketball continues to grow across Northern Ireland.

The work that the Belfast-based Sport Changes Life foundation has done across the island of Ireland for over a decade is also a contributor to the strengthening of the sport.

"We are thankful for the Council’s continued support as we work to make this year’s tournament bigger and better and bring world-class basketball to the young people of Northern Ireland, while also continuing to inspire young people to chase their dreams through our youth-facing eHOOPS and Schools Honour Roll programmes, as well as our work with transient youth across Belfast,” added Gareth.

Discussing what can be expected from the bigger and better 2018 Belfast Classic, Marc Mulholland added, “It is incredibly rare that this level of basketball is authorised to be played outside of the United States. We are lucky to be given the opportunity to host the Belfast Classic in Northern Ireland and, following an outstanding first year for the tournament, we were overjoyed to be able to double the size of the event, as we open the doors to more young people and their families.”

Paul Lambert, Vice President, Naismith Memorial Basketball Hall of Fame added, “Working in partnership with Sport Changes Life and the MAAC, The Hall of Fame is always excited to bring the living history of our beautiful game to new audiences.

"Guests can expect to see eight fast-paced games played by top NCAA Division 1 teams in the 3-day tournament.  From wonderful outreach to the local community to thrilling game action, the 2018 Classic should be a truly memorable event.”

Tickets for the Basketball Hall of Fame Belfast Classic are available via Ticketmaster, starting from £10, with family passes available from £25. This year, eager fans can also take advantage of a discounted tournament pass which will offer the chance to take in all eight games for £30.