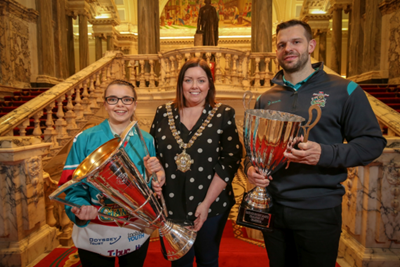 Belfast City Hall shone brightly in teal last night to celebrate a string of high profile championship wins for the Belfast Giants and the graduation of care experienced young people from the Odyssey Ice Academy.

Belfast City Hall shone brightly in teal last night to celebrate a string of high profile championship wins for the Belfast Giants and the graduation of care experienced young people from the Odyssey Ice Academy.
This weekend, the Stena Line Belfast Giants were crowned Elite League Champions, adding to their victory in the Challenge Cup and their securing of the Erhardt conference.

A reception hosted by the Lord Mayor of Belfast also celebrated the class of 2018-19 cohort of care-experienced young people as they graduated from the Odyssey Ice Academy and officially became ‘Community Giants’.
The Ice Academy has been funded by the Department for Communities (DfC) and the Odyssey Trust as part of the Executive’s Together: Building a United Community Strategy. Project partner, Include Youth, provided ongoing mentoring support to help build self-esteem, confidence and resilience as the young people transition into adulthood.

Speaking at the reception Lord Mayor of Belfast, Councillor Deirdre Hargey said: “We were delighted to host the Belfast Giants and Community Giants this evening. The Giants have had an incredible season so far and it’s fitting that we mark their remarkable achievements on the ice by illuminating City Hall in celebration. As well as being amazing athletes, they are fantastic ambassadors who have made an outstanding contribution to our city. The Ice Academy has made a real difference to the lives of young people in the North of Ireland and the Belfast Giants have been truly inspiring mentors for these young people. I’m delighted that we could welcome everyone to City Hall this evening to celebrate their achievements both on and off the ice.”

Head Coach of the Belfast Giants, Adam Keefe, said: “This has been an incredible year for the Belfast Giants. We are delighted the City has recognised the success of the team and turned Belfast City Hall teal. The support that we get from our fans means the world to us. This year has also allowed us to support another intake of Odyssey Ice Academy graduates to learn new skills and develop their talents, which has been another exciting achievement for our players.”

Fiona Surgenor, Head of Uniting Communities Programme at DfC, said: “The Ice Academy has represented a once in a lifetime opportunity for these young people to develop important life skills, with the support and inspiration of the iconic Belfast Giants. We have watched this group of young people take part in the Academy during the last few months and it is clear that this programme has made a real difference to the lives of those that have taken part.”

Community Giant Alisha Duncan said: “The Ice Academy has been one of the best experiences and has taught me so much both on and off the ice. I have met other young people who have gone through similar experiences as me. The Belfast Giants helped us to build our confidence and skills, whilst having a lot of fun along the way. ”