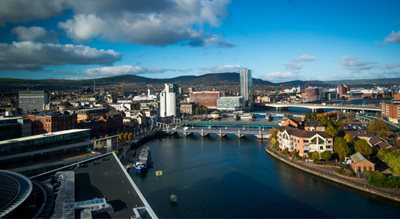 Belfast is set to introduce its own digital currency later this year following a successful application by the city council to be part of a global city currency challenge.

Belfast is set to introduce its own city currency via an app later this year following a successful application by the city council to be part of a global challenge.

Belfast Coin will be an incentive-based digital currency aimed at rewarding positive actions by residents, as well as encouraging economic growth and helping to achieve environmental goals.

The initiative – a first for Northern Ireland - has been made possible thanks to Belfast’s membership of 100 Resilient Cities, a global network funded by the Rockefeller Foundation.

Belfast City Council has worked alongside the Tel Aviv and UK-based company, Colu, and shared best practice with several global cities as part of the challenge.

Grainia Long, Belfast Commissioner for Resilience, said: “Being selected to be part of the global city currency challenge means an important opportunity for Belfast, and I’m delighted that this has been made possible through our partnership with 100 Resilient Cities, and working with Colu.

“Belfast Coin will be introduced later this year and it’s our hope that it will initially give an economic boost to local businesses, as well as helping Council achieve other long-term goals, including environmental improvements.

“This challenge gives us the opportunity to explore how a city currency can bring residents, businesses and city partners together to support inclusive growth - a key priority within our Belfast Agenda. It’s also really exciting to be working alongside other global cities to learn from each other about urban problem-solving and sharing best practice.”

Today’s announcement by Colu marks the formal commencement of the pilot initiative, and work is now underway to sign up a range of partners and build an eco-system of stakeholders before the currency is formally launched later this year.

Once launched, residents will be able to accumulate Belfast Coin in return for a range of activities – including shopping local, recycling, volunteering and taking part in civic activities.

Ms Long added: “By motivating residents to make a positive difference, we hope Belfast Coin will strengthen their connection to the city they live in. Our aim is to engage a range of stakeholders from across the city to allow the currency to be used as payment in shops, cafes, restaurants and other businesses.”

Amos Meiri, CEO and co- founder Colu, said: “Belfast Coin will make a tremendous contribution to the city’s development - economically, socially, environmentally, and beyond. Just as importantly though, we hope to ensure that Belfast Coin will bring all the different elements of the city closer to each other, by empowering residents, businesses, NGOs, community groups and educational institutions to work together towards the same goals.

“By utilizing Colu’s innovative technology in this way, Belfast is demonstrating that it is a forward-thinking, exciting and ambitious city.”