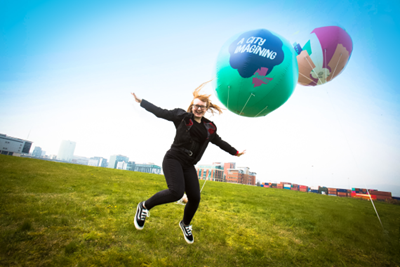 Belfast City Council launched ‘A City Imagining’ today, its draft Cultural Strategy which is out for public consultation for 12 weeks.

During that time, people are being encouraged to share feedback and ideas on how the themes and priorities outlined in the draft can be realised, as Council embarks on an ambitious 10 year plan to support the cultural life of the city.

Alistair Reid, Strategic Director of Place and Economy Belfast City Council, said: “There is an abundance of evidence that a vibrant arts and cultural scene drives tourism, attracts investment, promotes inclusion and community cohesion, and retains and attracts talent – all priorities within our Belfast Agenda.

“We’ve been having conversations with the public on the development of the city’s cultural and creative offering since 2017 as part of an ongoing engagement programme, and these conversations have helped to shape the draft cultural strategy which we’re unveiling today.

“We want people to dream big; to share their ideas on how they imagine our city in 10 years’ time. People are at the heart of culture, and so it is important for us that our strategy has a strong citizen-focussed approach, that it provides long-term sustainability for the sector, and is integrated as part of major developments plans such as the Belfast Story destination hub.”

Mr Reid added: “It’s important for us to have a partnership with the cultural sector and recognise and support local creative talent. We want to see creativity and culture effect change, and to bring ideas to fruition; for our city to be enriched and empowered through being connected and engaged.

“For some people culture is sport, it’s art, it’s music, it’s the buildings around us, the food we eat, or the languages we speak – culture is everywhere, and we want to really harness that and bring people along on the journey with us.”

The draft strategy outlines a number of key strategic milestones over the next 10 years:

People can find out more about the draft strategy and upcoming public engagement sessions via the council’s website www.belfastcity.gov.uk/culturalstrategy and join the conversation on social media using the hashtag #BelfastImagining

Mr Reid added: “Our Belfast Agenda sets out a vision of a culturally vibrant city for 2035 and our aim for the cultural strategy is to help make that vision a reality.

“It’s also important to consider culture’s influence on our resilience as a city. We want to ensure the long-term stability and resilience of our cultural sector while setting ambitious growth targets at the same time.”