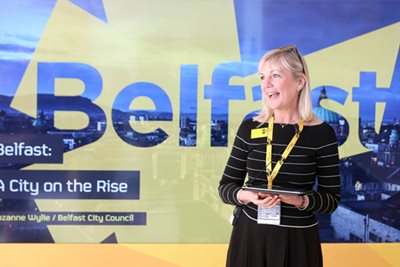 Belfast is on course to double its £1billion investment target, with around £2billion of investment in regeneration and commercial property development either complete, on site, or in planning, according to Belfast City Council.

Belfast is on course to double its £1billion investment target, with around £2billion of investment in regeneration and commercial property development either complete, on site, or in planning, according to Belfast City Council.

Speaking at a ‘MIPIM 2019 Wrap Up’ event on Tuesday 16 April at the Belfast Harbour Commissioners' Office, Suzanne Wylie, Chief Executive, Belfast City Council said: “In 2016, as a council we set an ambitious target of bringing £1billion of investment in regeneration and commercial property development to Belfast. Now, just three years down the line, we’re on course to double that target.

“This £2billion investment figure bears testament to all that our city has to offer. Since the Millennium, we’ve been saying that Belfast is a city on the rise and, today, it’s clear to see how far we’ve progressed and how much regeneration is still taking place. Just look at the number of cranes on the skyline again.

“This volume of regeneration is thanks to strong collaboration between the private and public sectors. And if we want to continue securing investment in Belfast, it’s imperative that we work together to market our compelling proposition, and that we have the industry and technical knowledge to back it up – which is why initiatives like MIPIM are so important.”

“Alongside the planned Belfast Waterside scheme in the East Bank area, previously home to Howden Sirocco, Belfast Harbour Estate has been investing in offices and a hotel in City Quay. Meanwhile, there are exciting proposals for an environmental, film and leisure-led commercial development at Giant’s Park, North Foreshore and a further phase of regeneration in Titanic Quarter.

“Added to that, Belfast will also benefit from significant investment in many other major regeneration schemes like the Weavers Cross Transport Hub, Ulster University’s impressive new Belfast campus, and a range of Grade A office schemes – including Merchant Square, The Mercantile, the development of the Ewart Building on Bedford Street and the new building for Kainos on the Dublin Road.

“We have also seen managed student accommodation being built across the city along with new hotels and there is considerable interest in new managed apartment schemes.”

A delegation of around 100 local business leaders recently attended the world’s largest property conference, MIPIM 2019. For the fourth consecutive year, ‘Team Belfast’ showcased many of these schemes and highlighted Belfast and the surrounding region as an outstanding destination of choice for tourism, education, business and living – all resulting in demand for real estate investment. The delegation also emphasised the tremendous opportunities that the City Deal investment of £850m will create.

“Over three days, the delegation delivered a busy programme of informative events, showcasing Belfast as the place to invest right now to an audience of over 28,000 investors, developers and occupiers.

“It’s more important than ever that, together, we get out and market Belfast and the surrounding region internationally,” she continued. “MIPIM is a hugely important platform for attracting and securing international real estate investment.

“Investment in real estate not only delivers jobs and economic prosperity; it’s essential to our ability to attract international businesses to our city and region, whilst supporting our indigenous businesses to grow and flourish.”

For more information on investment opportunities in Belfast, go to investinbelfast.com