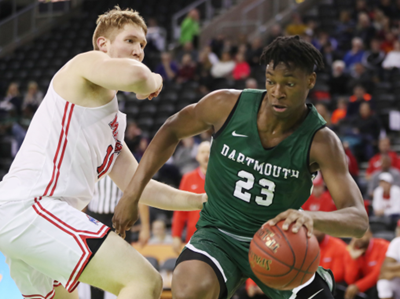 Eight collegiate American basketball teams are competing in Belfast Classic tournament. Now in its second year, the three-day tournament brought to Northern Ireland through a partnership with the Sport Changes Life Foundation, Naismith Memorial Basketball Hall of Fame and the Metro Athletic Conference (MAAC), is the only NCAA competitive collegiate basketball tournament to take place in Europe.

Day one of the Belfast Classic saw thousands of basketball fans and enthusiasts travel to Belfast’s SSE Arena from across the island of Ireland and further afield including the United Kingdom and the United States. Split into two brackets, Samson and Goliath, the Samson bracket began their title race yesterday, with Marist College and Dartmouth College going head to head for their place in the championship game, which will be played today (Friday 30 November) at 7.30pm. Setting an excellent standard for this tournament’s game play, the Marist College Red Foxes pulled off a solid win over Dartmouth College with a final score of 76-58.

The Lord Mayor of Belfast, Councillor Deirdre Hargey said: “It is great to see the Basketball Hall of Fame Belfast Classic tournament return to Belfast for its second year after its huge success last year. We are delighted to be able to welcome double the amount of college basketball teams to Belfast this year for the tournament as well as welcoming many visitors to Northern Ireland from Europe and beyond, who are here to spectate and cheer on the fantastic teams participating in the Belfast Classic.

“The atmosphere in the SSE Arena yesterday was electric and I am very excited to feel it intensify as the weekend develops and the championship games for each bracket approach. This tournament proves that Belfast continues to build upon its reputation for hosting world class sporting events and I want to wish all of the teams the best of luck throughout the remainder of the weekend.”

The second day of the tournament takes place today (Friday 30 November), with teams from the Goliath Bracket; University of Wisconsin-Milwaukee, University at Buffalo University of San Francisco and Stephen F. Austin State University taking to the court, with gameplay beginning at 10.30am. The Samson Bracket consolation game will take place at 5.00pm between Dartmouth College and University at Albany and the bracket gameplay will culminate in a Championship game between Marist College and Long Island University at 7.30pm, resulting in the first of the Belfast Classic Cups being claimed.

The event offers a fun day out for families and friends of all ages and is the perfect sporting occasion for youth groups, schools and sporting clubs to enjoy. The Basketball Hall of Fame Belfast Classic offers loads of fun and entertainment throughout the tournament complemented by the interactive Fan Zone located within the Odyssey Pavilion, which offers basketball-themed games and activities, exhibitions by skilled players, and opportunities to get involved in supporting your favourite teams.

Tickets are still available for from the SSE Arena box office or online at www.belfastbasketballclassic.com.