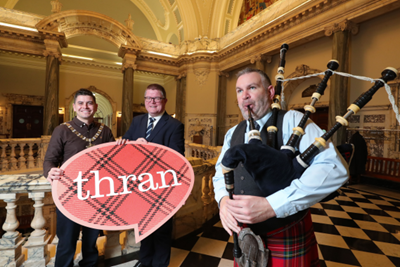 The Ulster Scots language and heritage has been celebrated at Belfast City Hall with an event to mark Burns Week.

The Ulster Scots language and heritage has been celebrated at Belfast City Hall with an event to mark Burns Week.

The Lord Mayor, Councillor Daniel Baker joined Ulster Scots enthusiasts and showed his support for language diversity in the city.

He said:  “We are not only commemorating the life of the poet Robert Burns today, but celebrating the contribution he made to Scottish culture and the importance that has for many people living in our city.

“Belfast is rich in language diversity and I think that is something we should celebrate and be very proud of. I am delighted to be here today and to have the opportunity to listen to some poetry, witness some impressive Scottish jigs and listen to the traditional music.”

Councillor Baker added: “As part of Council’s language strategy, we are committed to promoting the diversity of language that exists across the city, including the Ulster-Scots language, culture and heritage.”

More information on Council’s language strategy is available on our website www.belfastcity.gov.uk/languagestrategy

Copies of the strategy can requested by telephoning 02890 320202 or by emailing equality@belfastycity.gov.uk