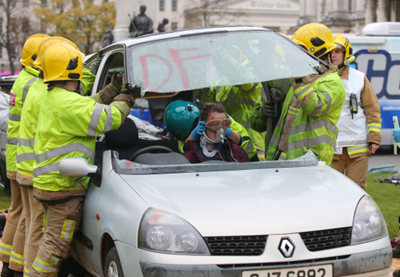 Belfast City Hall this morning was the venue for a special event aimed at instilling a sense of responsibility in young people who are about to start, or have just started, driving.

Belfast City Hall this morning (Tuesday 16 October) was the venue for a special event aimed at instilling a sense of responsibility in young people who are about to start, or have just started, driving.

Teenagers from schools across the city will attended the award-winning Road Safe Roadshow, which highlights the impact of a car crash on their lives, their loved ones and everyone else involved. Hard-hitting presentations told the story of a typical young driver who has just passed his test and bought his first car, only to be involved in a crash. During the presentations, the teenagers heard from a range of speakers, including a police officer, a paramedic, a fire fighter and a hospital consultant: one by one they talked about the crash and their experiences at real road traffic collisions, dealing with the injured, dealing with the families of the bereaved and dealing with their own personal emotions.

After the presentations, the NI Fire and Rescue Service, PSNI and Ambulance Service, with the help of actors re-enacted the aftermath of a crash scene, including extraction of a casualty from a car, on the front lawns of City Hall.

The simulation will be repeated in the City Hall grounds again tomorrow (Wednesday 17 October) between 11.30 am and 12.30 pm.

The Roadsafe Roadshow, devised by the Police Service of Northern Ireland Roads Policing Unit, and supported by AXA Insurance, has been seen by thousands of teenagers all over Northern Ireland and has picked up a number of prestigious education and training awards.

Recognising that many people aged less than 25 are killed or injured on our roads each year, the Roadshow aims to bring its message to those about to start out on what will, hopefully, be a long and safe motoring career.

The exercise will be repeated tomorrow (Wednesday).