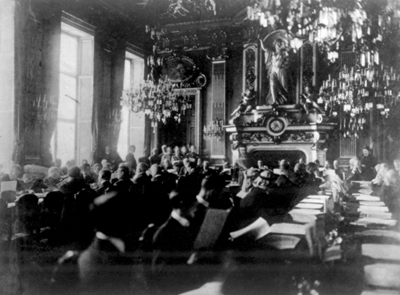 Prominent political movements that shaped our society will be discussed in two free events in City Hall this month as part of the Decade of Centenaries programme.

Prominent political movements that shaped our society will be discussed in two free events in City Hall this month as part of the Decade of Centenaries programme.

‘The Paris Peace Settlement and boundaries redrawn’ will be examined by Professor Thomas G. Fraser from Ulster University on Monday 20 May, from 6.30pm-9pm.

Professor Fraser will discuss changes to central and Eastern Europe’s political map after the defeat of Germany and the implosion of the Austro-Hungarian Empire. The talk will also consider how the ambitions of European powers, chiefly Britain and France, led to the creation of new boundaries in the Middle East resulting from the collapse of the Ottoman Empire.

At this event there will also be a performance of Philip Orr’s drama ‘Peace Day’ about post-conflict stress. The play opens with the recent story of a military wife who is suffering from ‘secondary’ trauma and concludes with the story of a troubled Great War veteran who is trying to come to terms with a post-war world.

On Thursday, 30 May, from 6.30pm – 8.30pm, journalist, author and historian Padraig Yeats will deliver a talk, Labour Must Wait, about the 1919 engineering strike and the interface between the Labour movement and the constitutional priorities for the day for Unionism and Nationalism.

Both events are part of the Decades of Centenaries programme of events which remembers a decade of key historical moments that shaped the history of Northern Ireland and Ireland a century ago.

Pre-registration for both events is essential and can be done by emailing goodrelations@belfastcity.gov.uk or calling 028 9027 0663.

More details on the full Decade of Centenaries programme can be found at www.belfastcity.gov.uk/goodrelations, where you can also sign up to receive regular email updates.