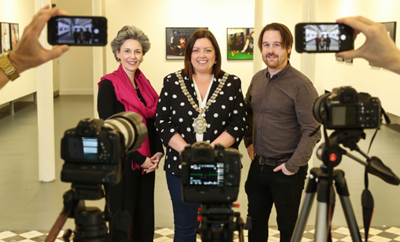 Belfast Lord Mayor Councillor Deirdre Hargey has helped to launch the 2019 Belfast Photo Festival, which will explore the role of photography in the era of alternative facts and fake news.

Belfast Lord Mayor Councillor Deirdre Hargey has helped to launch the 2019 Belfast Photo Festival, which will explore the role of photography in the era of alternative facts and fake news.

A programme of the finest national and international contemporary photography will be on show from Thursday 6 – Sunday 30 June in art galleries and outdoor spaces. Taking the theme of “Truth and Lies”, the festival will look at how photography can be used to influence opinion; from carefully choreographed photoshoots to image manipulation and misrepresentation.

As part of the festival, ICONS by artists Jojakim Cortis and Adrian Sonderegger will be displayed on the lawn at Belfast City Hall. Visitors will be able to view images of meticulous three-dimensional models, constructed to create astonishingly realistic reconstructions of some of the most recognisable images in history, including Tank Man, the striking image of the unknown protestor who stood in front of a convoy of Chinese military tanks on Tiananmen Square, Robert Capa’s The Falling Soldier, The Hindenburg Disaster and more.

Italian photographer Oliviero Toscani, who rose to international acclaim as the photographer behind fashion brand Benetton’s controversial advertising campaigns that pushed the limits of the industry, will host a talk and Q&A at the Ulster Museum on 13 June. And at Belfast Exposed, Margins of Excess by Max Pinckers, who is listed among the ranks of Magnum Photos, presents a body of work looking at the role of mass media in communicating idiosyncratic versions of six individuals’ own reality who momentarily were subject to nationwide media attention and scrutiny in the US.

“We’re introducing it to public spaces and expanding our outdoor presence while making the artform interactive and engaging. Among the exhibitions that will take over these spaces, as well as those hosted in our partner galleries and venues, are significant bodies of work hand-picked for Belfast Photo Festival by representatives from global institutions such as Tate Modern, the New York-based Aperture Magazine and Magnum Photos; the agency behind some of the most striking and influential photographs of 20th century.”

As well as its extensive programme showcasing globally renowned names, including multi-national media and broadcasting company VICE, the festival will exhibit works from lesser-known artists through its Open Submission programme which attracted almost 32,000 entries from 83 countries.

Michael adds: “Our Open Submission proved hugely successful this year and demonstrates just how influential and well-recognised Belfast Photo Festival is on the international stage; established and challenger artists are eager to exhibit on our shores.”

The winner of the 2019 Belfast Photo Festival Open Submission will be revealed at the opening ceremony on Thursday 6 June.