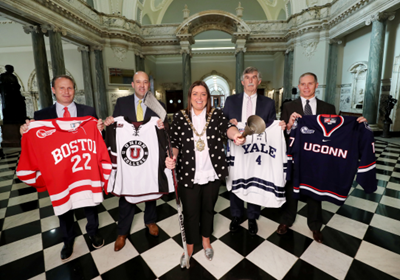 The Friendship Four Hockey Tournament is set to return to the SSE Arena, Belfast this November (23rd and 24th) for its 4th consecutive year.

The Friendship Four Hockey Tournament is set to return to the SSE Arena, Belfast this November (23rd and 24th) for its 4th consecutive year.

The ice hockey tournament, which consists of a four-game competition, will see top student athletes from Boston University, The University of Connecticut, Union College and Yale University, all compete for the prestigious Belpot trophy. The tournament presents a unique opportunity for local ice hockey fans to watch the only National Collegiate Athletic Association (NCAA) hockey tournament that takes place outside of the United States.

Over 20,000 spectators are expected to head to the SSE Arena to watch the action unfold during America’s culturally significant Thanksgiving holiday on Friday 23nd November and Saturday 24th November 2018.

Eric Porter from the Odyssey Trust said, “We’re excited to welcome back our American friends from across the pond! We consider it a great privilege to get to host such a fantastic and exhilarating tournament and we’re also thrilled get to use this opportunity to strengthen our ties with Boston, our sister city. We want to thank all those supporting the event and we encourage everyone to get a ticket and come and join us for what promises to be a brilliant weekend!”

Lord Mayor of Belfast, Councillor Deirdre Hargey said, “Now in its fourth year the Friendship Four Ice Hockey Tournament continues to grow from strength to strength. It’s now one of Belfast’s premium sporting events and is a fantastic working outcome of our sister cities relationship with Boston.

“With the games televised and watched by a worldwide audience, we have a unique opportunity to showcase the best of Belfast and Northern Ireland. I’m looking forward to giving all the teams, their families and travelling support a big Belfast welcome, as well as enjoying some of the high-octane action on the ice.”

Tourism NI Chairman, Terence Brannigan, said, “2017 was a record-breaking year for the tourism industry in Northern Ireland with almost 5 million visitors and events such as the Friendship Four Hockey Tournament are key to ensuring our continued success in growing our visitor numbers, particularly within our international markets.

“We wish the organisers, players, spectators and visitors the very best for what I’m sure will be another fantastic and successful tournament”.

Joe Bertagna Commissioner of Hockey East said, “This event is second only to our conference championships on our annual calendar. I know I speak for Steve Hagwell as well when I say that nothing in our professional careers is as rewarding as our continued participation in the friendship Four week.”

The Friendship Four Tournament began in 2015 in support of the Boston/Belfast sister cities agreement which was designed to foster stronger economic development, trade and investment, tourism, cultural exchange and educational linkages between the two cities.

For more information on the tournament and to book tickets, visit www.ssearenabelfast.com/friendship-four-2018