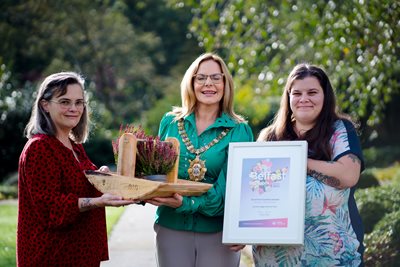 Ben Madigan’s Bar and Kitchen on the Cavehill Road, Zuni Hairdressing in University Street and the Europa Hotel have scooped top honours in this year’s ‘Belfast in Bloom’ competition, run by Belfast City Council.

Residents from across the city have picked up awards for ‘Best Front Garden’, ‘Best Hanging Basket’ and ‘Best Window Box’. While residents and communities have also celebrated wins for transformational, green-fingered projects – among these Eden Alley and Rainbow Alley.

A special awards ceremony took place at Malone House on Thursday (20 October) for the winners and runners-up of the competition.

Presenting the awards, Lord Mayor Councillor Tina Black, said: “I want to thank all the residents, communities, businesses and schools in the city who took part in our popular Belfast in Bloom competition, which has been running for 29 years now.

“There are so many green-fingered residents and transformational community gardening projects in Belfast that continue to make our city bright and beautiful. This good work has wider environmental benefits and is great for nature, whilst also contributing to our city council’s commitment to tackling climate change.

“Gardening by yourself or with others, as shown through some of these wonderful projects that have won awards this year, is also said to bring important physical and mental well-being benefits.

“Well done to all the winners and runners-up of Belfast in Bloom 2022 and thanks for your fantastic work and efforts in making Belfast bloom year after year!”

In the commercial category of the competition, Ben Madigan Bar and Kitchen won the ‘Best Public House’ award, Zuni Hairdressing won for ‘Best Commercial Premises’ and the Europa Hotel won the ‘Best Hotel’ category for the second year in a row.

While Rainbow Alley which was created and transformed into an urban garden last year by residents living on Reid Street, off the Cregagh Road, won the ‘Best Community Group’ award.

Among residents who received awards were Matt McCarthy who scooped two for ‘Best Front Garden’ and ‘Best Hanging Basket’ in north Belfast.

The winners received certificates, a garden centre gift voucher and a handmade garden trug created by the Half Moon Lake Men’s Shed group.

The full list of awards winners is available at www.belfastcity.gov.uk/belfastinbloom