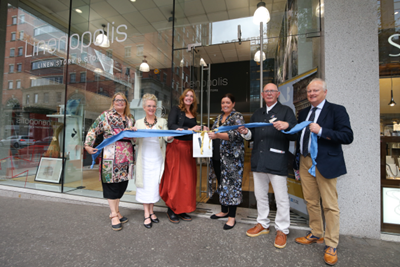 ‘Linenopolis’, a new “pop-up” visitor experience and store has opened in Bedford House, in the heart of Belfast’s historic Linen Quarter.

‘Linenopolis’, a new “pop-up” visitor experience and store has opened in Bedford House, in the heart of Belfast’s historic Linen Quarter.

Located opposite the Grand Central Hotel on Bedford Street, it’s the first ever experience on the island of Ireland wholly dedicated to linen – providing both an insight to its social, economic and cultural history and a showcase for the best in contemporary linen brands as part of the first Linen Biennale.

Belfast Lord Mayor Councillor Deirdre Hargey officially opened the temporary attraction, which was conceptualised and produced by the Central Business District, with support from the Linen Biennale and Heritage Lottery Fund.

Linen plays a central role in the Belfast Story; bringing huge wealth and employment, driving rapid population growth, and directly contributing to Queen Victoria awarding Belfast ‘city status’ in 1888. By the second half of the 19th century, Belfast boasted the largest linen industry in the world; and many of the beautiful red brick buildings in the Linen Quarter – now being comprehensively regenerated - were built to house the offices and warehouses of the industry.

Speaking at the launch, the Lord Mayor said: “I’m so proud to see Linenopolis opening here in Belfast’s Linen Quarter. It’s the first store and visitor experience of its kind on the island of Ireland, and the fact that it’s here in Belfast, the historic home of the industry, is significant and illustrates the appetite for further opportunities in this area.

“Although this pop-up store will only be here for a short time, linen itself has a great future – as the 33 linen entrepreneurs here demonstrate. It’s wonderful to see linen featuring as an important part of Belfast’s story and our thriving creative industries once more.”

Chris McCracken from Belfast’s Central Business District is delighted by the level of interest in the project: “The Central Business District only launched in April this year. One of our first goals was to create innovative opportunities for entrepreneurs and we’re proud to support the creative arts in this way. We also want to tell the story of the historic Linen Quarter and rebrand it as one of the must see destinations in the city.
Our hope is that we can find a more permanent home for Linenopolis, and that this will continue to build momentum in the regeneration of this increasingly vibrant area.”

Anthea McWilliams and Robert Martin commented at the launch: "As co-founders of this, the first Linen Biennale, we’re both thrilled and delighted to be working with the Central Business District on this unique and imaginative venture, the Linenopolis Story and Store in Belfast.

“The linen story is a rich heritage for us all to celebrate and it’s fitting that it has a new home within the Linen Quarter, Belfast. Having the work of so many high calibre makers, artists and linen producers from across Ireland contributing to the store will make for a superb customer experience and one we hope many visitors will enjoy.”

Linenopolis is located on Bedford Street and will be open seven days a week until the end of September.
For more information on Linenopolis and the Linen Biennale NI, go to www.linenbiennalenorthernireland.com follow @LinenAliveNI on Twitter and @linenopolis on Instagram.