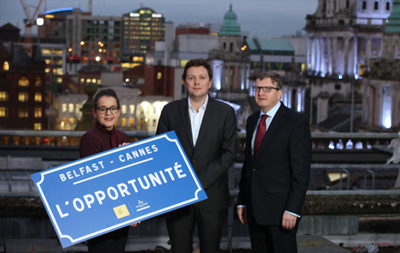 A well-known Belfast property development firm has been announced as headline sponsor of the 80-strong delegation from Belfast travelling to international real estate investment conference MIPIM.

A well-known Belfast property development firm has been announced as headline sponsor of the 80-strong delegation from Belfast travelling to international real estate investment conference MIPIM.

Oakland Holdings, the developer behind Belfast’s largest ever Grade A office building Merchant Square, is the latest sponsor to back the Belfast MIPIM 2019 campaign and will travel with the delegation in March this year to help market Belfast as a global destination for major investment.

MIPIM brings together the most influential global players from all international property sectors, and is this year expected to attract around 2,000 exhibitors and 20,000 investors, developers, occupiers and other influencers from over 80 countries around the world.

Whilst this will be the fourth consecutive year that a group has represented Belfast MIPIM, this year’s delegation will, for the first time, include representatives from each of the five councils partnering with Belfast City Council in the Belfast Region City Deal bid.

Councillor Donal Lyons, chair of Belfast City Council’s City Growth and Regeneration Committee, commented: “Any major city in Europe serious about promoting itself will be at MIPIM, and Belfast is no different. We return to MIPIM 2019 with a hugely positive story to tell, underpinned by our confidence that the Belfast region, and indeed Northern Ireland, is an outstanding place to invest.

“MIPIM very much sits within the wider Belfast Agenda, alongside a range of other initiatives that we’re confident will help to generate investor attention – including our membership of the 100 Resilient Cities global network and of course the Belfast Region City Deal.

“Belfast enjoyed its most successful year on record in the office market in 2018, as take-up figures doubled year-on-year. This was helped significantly by PwC’s announcement of its plans to move to Oakland’s Merchant Square, which comprises 250,000 sq ft of high-quality Grade A accommodation.”

Speaking on behalf of Oakland Holdings, Gareth Graham said: “Our Merchant Square development will be one of the most striking office buildings ever undertaken in Belfast and will prove a catalyst for the wider regeneration of Belfast city centre.

“We undertook the Merchant Square development speculatively, because we believed that the quality of the development would be a major attraction, and that has proven to be the case.

“That is the message we are bringing to MIPIM later this year. Belfast is a city with the imagination and entrepreneurial spirit to meet the demands of the commercial sector. We will seize every opportunity to make sure that the advantages and attractions of Belfast are heard far and wide.”

Jackie Henry, senior partner at Deloitte Northern Ireland and chair of the Belfast MIPIM Taskforce said that Belfast is already reaping the benefits as a result of the collaboration between the public and private sectors throughout the MIPIM delegation.

She added: “A number of the strong business connections made at MIPIM to date have resulted in a number of major schemes being brought to the market in Belfast, and we are thrilled to welcome more new sponsors such as Oakland to the growing Belfast MIPIM delegation.

“Once again, at MIPIM 2019, we will be delivering a programme of exciting events to ensure that Belfast’s compelling investment proposition is reaching new audiences and international investor networks.”