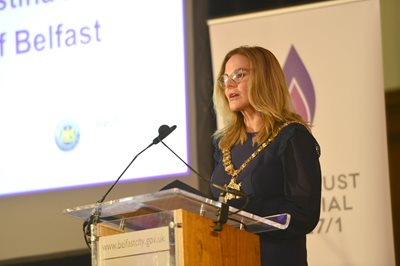 The event, hosted by The Executive Office in conjunction with the Holocaust Memorial Day Trust and Belfast City Council, saw around 400 people gather at Belfast City Hall on Tuesday, January 24 to remember the victims and survivors of the Holocaust and subsequent genocides in Cambodia, Rwanda, Bosnia and Darfur.

Keynote speaker at the event was Holocaust survivor Eve Kugler, who spoke movingly about how her family was torn apart by the Nazis when they were forced to flee their home in Germany and her parents were sent to concentration camps.

“I hope that those who heard me will remember and talk about it with their friends. I would like them to understand that people are people and there is no reason why one group, because they look different or have a different race or nationality, should be treated badly by anyone. People are people – it sounds trite but that's essentially what the message is,” Eve said.

Speaking at the event, Belfast Lord Mayor, Councillor Tina Black, said: “The Holocaust calls on us to reflect on what can happen when prejudice and identity-based hate is left unchallenged. Holocaust Memorial Day reminds us of our ability to interrupt expressions of rage, division and hatred.  Each of us has the power to stand against expressions of prejudice.  Our actions can help to replace separation with inclusion, change fear to hope and replace hostility with love.”

Denis McMahon, Permanent Secretary of The Executive Office, also spoke at the event.

“Holocaust Memorial Day is a powerful reminder that we all have a responsibility to stand up to prejudice, intolerance and discrimination,” he said.

“This year’s theme, Ordinary People, highlights that every one of us has a role to play in making our society a more inclusive and welcoming place for all. No-one should underestimate their potential to positively impact change; or forget that inaction and complacency fosters the perpetuation of hate. Ordinary people can achieve extraordinary things.”

Among those who attended the Regional Commemoration were members of the local Jewish community and representatives of other faith groups and minority ethnic communities.

Olivia Marks-Woldman, Chief Executive of the Holocaust Memorial Day Trust, stressed the importance of the Regional Commemoration and welcomed the return of the in-person ceremony – the first since the pandemic.

“I’m delighted that The Executive Office is also continuing to support local activities to mark Holocaust Memorial Day,” she said.

“It was very moving to meet for collective commemoration, with Holocaust survivor Eve Kugler’s experiences at the heart of the ceremony.

“Eve is an amazing woman, and her testimony will no doubt bring to life the experiences of those who endured the Holocaust. We owe it to those who were murdered, and those who survived - and even future generations - to keep the memory of the Holocaust alive.”