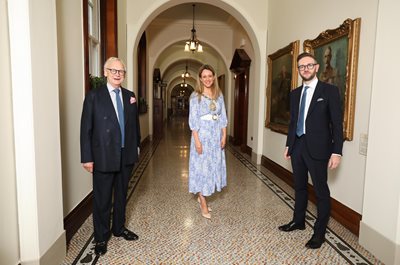 The meeting with Lord Deben and Chris Stark came ahead of Belfast taking part in COP26 - the UN’s annual climate change conference, being held in Glasgow this November.

Lord Mayor, Councillor Kate Nicholl said: “Belfast City Council has made a commitment to become a carbon-neutral organisation and since declaring a climate emergency in 2019 that has become a key focus, especially as we move towards COP26 in November.

“Our resilience strategy, the city’s first climate plan, was launched last December, and I’m delighted that the meeting with Lord Deben and Chris Stark provided an opportunity to highlight some of the progress Council has made since then, while also addressing how we can continue to build momentum in tackling climate change in our city.

“Local authorities have a major role in driving action within communities and as a Council we want to take the lead and set an example to every resident.”

The Climate Change Committee is an independent body and advises the UK and local governments on emissions targets and how to prepare for the impacts of climate change.

The discussion focussed on the importance of local leadership across regions within the UK in driving climate action, and the actions that Belfast has taken as a city and at Council level to transition to a low carbon and climate resilient economy.

Lord Deben, Chairman of the Climate Change Committee said: “I’m delighted to see the progress that Belfast is making in its climate planning.

“One of the hallmarks of a successful national approach to climate change is creating the conditions for a distinctive city region approach.

“Many of the most important aspects of the transition to zero carbon, like housing, public transport and waste management, rest under councils’ control. We’ll need every council to embrace an ambitious approach.”