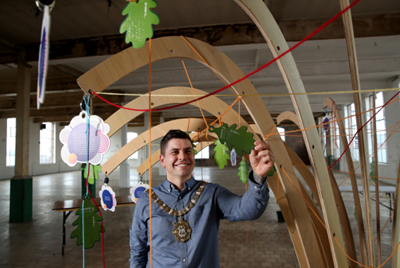 Belfast Lord Mayor Councillor Daniel Baker joined around 40 young people online this afternoon, for a discussion on resilience and what it means for the city’s future.

Belfast Lord Mayor Councillor Daniel Baker joined around 40 young people online this afternoon, for a discussion on resilience and what it means for the city’s future.

The engagement sessions with Belfast Youth Forum and youth groups from across the city - due to be held as part of Belfast City Council’s consultation on its draft Resilience Strategy – were moved online to allow the discussion to go ahead and capture feedback while the consultation is still open.

Councillor Daniel Baker said: “While Council’s immediate response to the Covid19 pandemic has resulted in some projects inevitably having to be paused, our work on our resilience strategy for the city is continuing in the background.

“This remains an important piece of work; in fact, never has resilience been so foremost in our minds as we, as a city and a community, face these unprecedented times together. And while at the moment, our focus is on staying home and staying safe, there will be a recovery period for the city in the future, and so it’s important that we prepare for that.”

Councillor Baker added: “While climate change is very much at the heart of our draft resilience strategy, it is much wider than that. We have identified pathways for action around three key issues – climate, children and young people, and better connecting the city.

“Hearing from our city’s young people, the next generation, is crucial in this debate so I’m pleased that we have been able to move that discussion online today and capture their feedback and ideas.”

During February and March 2020, Council held nine neighbourhood workshops and five public drop in sessions, with more than 1,000 people sharing their views – nearly a third were young people.

Back in January, Belfast City Council and Queen’s University Belfast launched the Belfast Climate Commission – one of only three city-based climate commissions in the UK, joining Edinburgh and Leeds.

A youth subgroup of the Commission is now in the process of being established with nominations being invited from a range of groups including Belfast City Council’s Youth Forum, Ulster Wildlife and NI Youth Forum among others.

For anyone wishing to have their say on the draft strategy, the public consultation period has been extended until June 10 and questionnaires can be completed online www.belfastcity.gov.uk/resilientbelfast