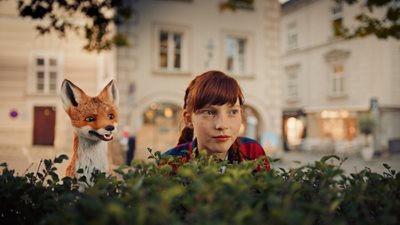 Belfast Lord Mayor Councillor Kate Nicholl has welcomed the return of the month-long Cinemagic International Film Festival for Young People. It’s back in cinemas and online from 1-31 October.

After a mostly digital programme in 2020, in this, its 32nd year, the festival’s return to venues includes Belfast’s UIster Museum, Odeon Cinemas and Queen’s Film Theatre. The Cinemagic streaming platform will play a significant part in screening the festival’s world cinema programme, with brand new titles for all ages to enjoy, and a catalogue of films released weekly.

The Lord Mayor said: "Belfast City Council is delighted to continue its support for the award-winning Cinemagic Festival. Festivals play a key role in our 10-year cultural strategy for the city and it’s inspiring to see how the film and television industry - something this city is passionate about - can bring people together from all walks of life and engage an entire community.

“I particularly admire Cinemagic's investment in our younger generation, which ties in with my own agenda of promoting the contribution of young people and getting their voices heard. After a challenging period, it’s great to see this festival back in some of our favourite venues too. Combined with this year’s virtual element, the organisers have come up with a fantastic hybrid programme that caters for all audiences.”

The festival is also looking for CineFocus and CineSeekers Juries to become young film critics to review animation, drama, and documentary films in cinemas, and over 150 young filmmakers will be celebrated online during the Young Filmmaker Showcase on QFT Player and The Cinemagic Player. The Festival Player is home to the world cinema programme and audiences can browse a catalogue of films released weekly and streamed from the comfort of home.

The Film Education programme presents opportunities for pre-school and primary to post-primary and third level students including in-school movie mornings, the NI Schools’ Animation Film Jury, The Film Report, and film classification with the BBFC. Cinemagic TV, the festival’s YouTube channel, has free to access Halloween arts and crafts tutorials so families can get creative this autumn.