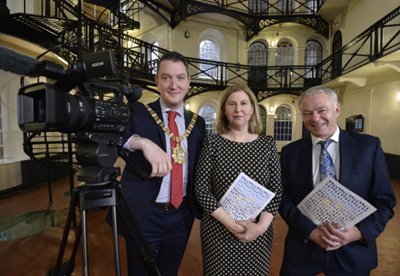 The ‘Valuing Languages’ film is the result of a joint project between Belfast City Council and students from Queen’s University film school.

The film highlights the range of languages used daily in communities across the city and the positive contribution they make, as well as exploring some of the challenges people face when language is a barrier.

Lord Mayor Councillor John Finucane, who attended today’s event, said: “What struck me about the film was just how many languages are spoken here in Belfast on a daily basis, in communities right across the city.

“From sign language to Polish, and Arabic to Urdu, Belfast is rich in language diversity and I think that’s something we can be very proud of. I would like to commend the students for putting together such a thoughtful and enlightening piece of work.”

The film follows a number of groups and explores their different relationship with languages – from a deaf ladies’ basketball team, an Irish-medium school teacher, members of the Belfast Islamic Centre, a Polish family, and a creative writing group for people with visual impairments – language in all its forms is explored.

Councillor Finucane added: “As part of Council’s language strategy, and in line with the aims of the Belfast Agenda, we want to create an inclusive, welcoming Belfast for all.
“With more than 70 different languages spoken in the city, it’s vital that we engage with language communities to address issues around integration and understanding, as well as identifying and removing barriers to ensure equality of opportunity for everyone.”

Calum Donaldson, editor of the film project, said: “This was a great project to be part of, and it was really interesting to explore the language diversity that exists within the city.

“I hope people learn something about other languages, cultures and communities, and that it promotes an acceptance of others.”