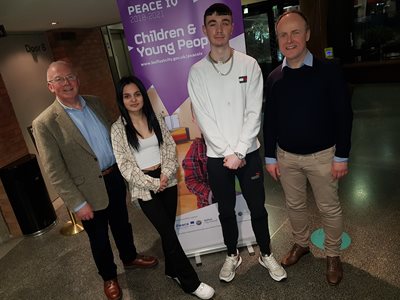 The On the Right Track! Personal Change Programme, is part of Council's PEACE IV programme, and works with marginalised young people between 13 and 16 years old.

The project, which is formally concluding its activities following three years of success, operates on a cross-community basis to explore issues of equality, identity, diversity and peacebuilding. In particular, it focuses on young people who have been involved in the youth justice system for incidents related to sectarianism, interface issues and hate crime.

Launched in 2019, the main aim of the programme has been to provide support to change the behaviours of the young people taking part by exploring and challenging the underlying and fundamental values that they hold.

Key achievements from the programme include:

- 42 young people who have completed the programme

- Over 11,600 hours of direct delivery to young participants

- Almost 380 OCN qualifications completed by young people on a range of topics.

The project is part of the Council's PEACE IV Plan, which is financed through the European Union and managed by the Special EU Programmes Body (SEUPB). The programme was commissioned and funded by Belfast PEACE IV and has been based at Extern’s Nelson Street offices close to the centre of Belfast.

A special ceremony to mark the formal conclusion of the project was held at The MAC Belfast, where young ‘graduates’ were presented with special certificates of achievement by Councillor John Kyle, Chair of Council's Shared City Partnership.

Councillor Kyle said: “I want to pay tribute to the young people who participated in the On the Right Track! Personal Change Programme, as part of our important PEACE IV work with children and young people. On completion, many have forged special friendships with others from different communities and cultures in the city and some are now young leaders in their youth clubs.

“There were over 265 hours dedicated to peacebuilding and the building up of strong cross-community relations. Through the programme, the young people looked at personal identity and cultural identity among other areas taking part in joint sports sessions and residentials. They also showed resilience attending sessions virtually during the pandemic when dealing with many issues faced by young people at the time including social isolation.

“This inspiring programme is in keeping with our Belfast Agenda vision too reflecting that young people are very much part of our city’s future.”

CEO of Extern, Danny McQuillan, said: “Since its launch, the On the Right Track! project has had a positive and transformative impact on the lives of dozens of young people who have taken part. Not only have they learned valuable new skills and earned qualifications, they have also developed a much greater understanding of other cultures and communities.

“We are so proud of everything these young people have achieved through this fantastic, life-changing programme over the past three years. That many of them managed to do so against the backdrop of the recent Covid pandemic and its many restrictions speaks to their dedication and hard work.

“We would like to thank everyone who has contributed towards making this project such a success, including our partners in Belfast City Council’s PEACE IV team, the Special EU Programmes Body, our match funders and, most especially, the young people themselves.”

Match-funding for the PEACE IV Action plan has been provided by The Executive Office in Northern Ireland and the Department of Rural and Community Development in Ireland.