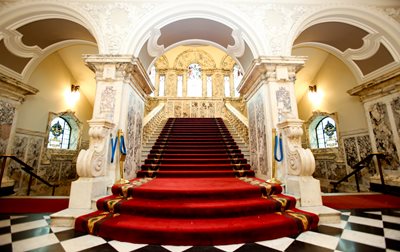 The High Sheriff of Belfast Councillor John Hussey will don ceremonial robes for a re-reading of the Accession Proclamation at Belfast City Hall on Sunday 11 September, before a Special meeting of Belfast City Council.

It follows the passing of Queen Elizabeth II. Official Proclamations will be read across the UK at 12pm on Sunday – at Royal Hillsborough and in Edinburgh and Cardiff - following the reading of the Principal Proclamation of the new King, Charles III, at St James’ Palace in the City of London on Saturday.

The High Sheriff will be joined by The Lord Lieutenant of the Co Borough of Belfast, Dame Fionnuala Jay-O’Boyle DBE DStJ, for the re-reading of the Proclamation in Belfast City Hall.

Following the re-reading of the Proclamation, Members of Belfast City Council will meet in the Council Chamber for a Special Meeting of Council to pay tribute to the late Queen. The meeting will be live streamed on the Council’s website at 3.30pm.

On Friday, the Lord Mayor of Belfast Councillor Christina Black was joined by the Lord Lieutenant of the Co Borough of Belfast to open books of condolence at City Hall.

Members of the public have been visiting City Hall to sign the books and leave their own personal tributes.

People have also been leaving floral tributes in the Garden of Remembrance which is open 7am-8pm daily.

The Union flag will be flown at City Hall until the morning after the state funeral, in line with Royal protocol.