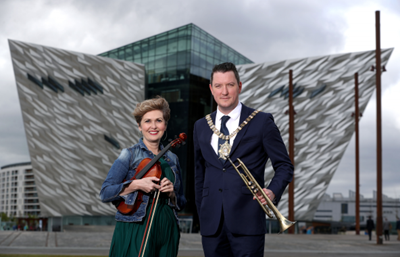 Belfast Lord Mayor Councillor John Finucane has launched the 2019 BBC Proms in the Park, which will be headlined by globally acclaimed singer Susan Boyle at Titanic Slipways.

Belfast Lord Mayor Councillor John Finucane has launched the 2019 BBC Proms in the Park, which will be headlined by globally acclaimed singer Susan Boyle at Titanic Slipways.

Tickets for BBC Northern Ireland’s biggest orchestral music party of the year on Saturday, 14 September will be available on a first come, first served basis from 9am this Friday, 21 June.

Lord Mayor of Belfast, Councillor John Finucane said: “Proms in the Park is always a great event for the city, and a fantastic opportunity for some of our finest local musicians to enjoy the spotlight alongside international stars. It’s also a fantastic showcase for Belfast with Titanic Quarter providing a unique and impressive backdrop, and I’m sure that this year’s Proms will be another great draw for music-lovers from across the city and beyond.”

Susan Boyle said: “I am absolutely thrilled to have been asked to join this year’s BBC Proms in the Park in Northern Ireland and can’t wait to perform for you all with the Ulster Orchestra on the historic Titanic Slipways. It will be magical.”

BBC Proms in the Park, presented by Noel Thompson and Marie-Louise Muir, remains one of BBC Northern Ireland’s most ambitious, and popular outside broadcasts. Approximately 10,000 people are expected to attend the event at the Titanic Slipways, Belfast, which is supported by Belfast City Council.

Now in its 18th year, BBC Proms in the Park Northern Ireland will be part of broadcast celebrations to mark the Last Night of the Proms, and will link music-making festivities at London’s Royal Albert Hall with BBC events around the UK. The BBC Proms is the largest classical music festival in the world, with more than 80 concerts across eight weeks from 19 July  – 14 September.

Viewers at home will be able to join in the excitement, with the BBC network television services linking with the Titanic Slipways, offering coverage of key moments from the evening’s entertainment. Highlights programmes will be recorded for later transmission on BBC NI television, BBC Four and the BBC iPlayer. Selected extracts from the Titanic Slipways will also be available on BBC You Tube and the entire concert will also be broadcast live throughout the evening on BBC Radio Ulster for audiences at home and around the world.

Peter Johnston, Director BBC Northern Ireland, said: “Proms in the Park remains one of our most ambitious and popular outside broadcast events. We are planning a great evening of music-making and entertainment. The Titanic Slipways will provide a stunning backdrop for our concert and the conclusion of the BBC Proms season. And we will be bringing this entire spectacle to a wider audience at home and around the world on BBC radio, television and online.”

To find out more about how to get tickets for this year’s Proms in the Park event go to www.bbc.co.uk/promsinthepark