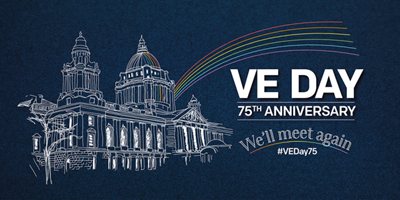 VE Day represents an important milestone in the world’s history as it was on that day – 75 years ago – when peace was declared, bringing an end to almost six years of war across Europe, and City Hall will be illuminated in red from dusk ‘til dawn to mark this year’s special anniversary.

The important milestone was marked in Belfast 75 years ago, when City Hall was also lit up to mark the occasion. And while the technology used will be different, the iconic building will once again be illuminated on the same day, in 2020.

While a number of commemorative events had been planned to take place in the city – including an afternoon tea for veterans at City Hall, as well as tea dances - the celebrations have moved online with people marking the occasion in their own homes.

In Belfast, 100-year-old WW2 veteran Teddy Dixon pre-recorded a short video to mark the anniversary. He gave a reading of the Nation’s Toast and introduced a recording of a piper playing ‘When the Battle’s O’er’.

The video will be broadcast on Belfast City Council’s Facebook and Twitter channels at 3pm on Friday as people across Belfast and beyond join in the Nation’s Toast to the heroes of World War Two: “To those who gave so much, we thank you.”

The Lord-Lieutenant for the County Borough of Belfast Fionnuala Jay-O’Boyle has also recorded a special VE Day message to be shared on Belfast City Council’s Twitter.

Later on Friday, people across Belfast are expected to take part in a nationwide sing-a-long of the Vera Lynn classic We’ll Meet Again, from their windows and on their doorsteps, following an address by the Queen at 9pm on Friday.

Belfast City Council wishes to recognise the service of veterans in the Second World War, particularly those who hailed from Belfast, and all those who contributed to the efforts in bringing about peace.

This year’s early May Day bank holiday has been moved for only the second time ever. It was also moved to mark the 50th anniversary of VE Day in 1995.