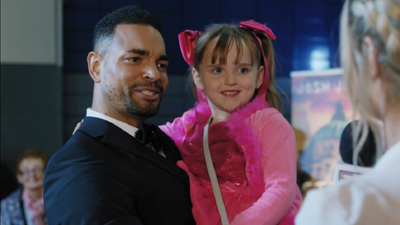 Billed as NI’s most heart-warming family feel-good movie of 2018 and described by director Tony Mitchell, as a “love letter to Belfast and the people of Northern Ireland”, Cinemagic’s new feature film will have its world premiere at Odyssey Cinemas Belfast on 2 October.

Billed as NI’s most heart-warming family feel-good movie of 2018 and described by director Tony Mitchell as a “love letter to Belfast and the people of Northern Ireland”, Cinemagic’s new feature film will have its world premiere at Odyssey Cinemas Belfast on 2 October.

Showcasing NI’s beauty and the warmth, humour and spirit of its people, Grace and Goliath has already received international acclaim. It’s produced by Cinemagic, the award-winning Belfast-based film and television charity for young people, and aspiring young film trainees from Northern Ireland, Republic of Ireland and Los Angeles as part of a unique Cinemagic training programme.

The premiere will mark the official launch of this year’s Cinemagic Film Festival in Belfast, the largest film and television festival designed for, and by, young people in the UK and Ireland.

A Hollywood big shot (and he knows it!), Josh Jenkins, sweeps into Belfast to make a movie, but before long his world crashes and he loses everything. Lily (the hotel cleaner) invites him to stay with her crazy family and gradually the people of this city touch his heart, forever.

Belfast Lord Mayor, Councillor Deirdre Hargey, said: “We’re very proud to have invested in the filming of Grace and Goliath, in helping the young LA trainee filmmakers to travel to Belfast, and in the Cinemagic Festival itself, which continues to grow in quality, scale, engagement and profile under the able leadership of Joan Burney Keatings and her team.

“Belfast and NI really punch above their weight when it comes to the creative industries – and that’s why we’ve selected it as one of our key areas for the Belfast Region City Deal which we’re negotiating with our partners. We want to see more and better jobs created here, more inclusive economic growth and the spotlight shone on our region. Grace and Goliath shows we’ve no shortage of talent – and the sooner the world knows about it, the better!”

Tony Mitchell, Director, who has lived in Northern Ireland for the last ten years, explains why he wanted to get involved with GRACE AND GOLIATH: “In addition to the film’s redemptive storyline I felt the time was right to show a modern, progressive Belfast and breakaway from its historical ‘troubled’ past. As a ‘blow-in’ I see it differently and wanted to use that to focus on its beauty and less on its division. Secondly, here was a film from Northern Ireland with a mixed-race lead actor and several very strong female roles – it was our turn to embrace change.

“Lastly, and most importantly the ethos of Cinemagic is to train young people. In addition to our small highly skilled indie crew we had 48 young trainees shadowing our every move; a challenging prospect that turned out to be an amazing experience for everyone involved. I couldn’t imagine doing another film without them.

Joan Burney Keatings MBE, producer and executive producer of GRACE AND GOLIATH, and Chief Executive of Cinemagic, the award-winning Belfast-based film and television charity for young people said: "We’re thrilled with the excitement and positive feedback, both locally and internationally, for our latest feature film GRACE AND GOLIATH. Private screenings earlier this year for industry representatives in Los Angeles and New York generated significant interest from distributors and international recognition for Cinemagic

“The film showcases the beauty of Northern Ireland, its stunning landscape and also the genuine warmth, humour and spirit of the Northern Ireland people. We are unique in so many ways and this feature film captures and conveys our positivity."

Ms Burney Keatings continues: “GRACE AND GOLIATH also offered young film trainees from Northern Ireland, Republic of Ireland and Los Angeles to take part in a unique Cinemagic training model. This pioneering model, which offers trainees invaluable practical, hands-on experience of working on a film, was initially designed for Cinemagic’s first feature film A CHRISTMAS STAR in 2014. Due to its huge success it has been further developed and now incorporates a fantastic international element working with young trainees from Los Angeles.”

GRACE AND GOLIATH (Cert PG) will open in cinemas from Friday 5 October.
You can view the trailer at: https://youtu.be/YnYVXpQVtUc and for more information on the Cinemagic International Film and Television Festival, go to www.cinemagic.org.uk

A series of school screenings will also be available across cinemas in Northern Ireland. For further information on this please contact your local cinema or film distributor Eclipse Pictures on claire@eclipsepictures.ie