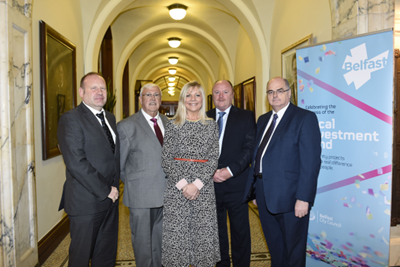 Belfast City Council says that thanks to its Local Investment Programme (LIF) more than £14 million has been leveraged in capital investment in local areas, and over £2 million in tourism and £3.5 million investment in accessibility has been generated.

Belfast City Council says that thanks to its Local Investment Programme (LIF) more than £14 million has been leveraged in capital investment in local areas, and over £2 million in tourism and £3.5 million investment in accessibility has been generated.

At a celebratory event in City Hall, with representatives from the 132 projects funded by LIF since it began in 2012, Alderman Jim Rodgers, Chair of the Strategic Policy and Resources Committee said: “I don’t think it is possible to over-state the impact that all the funded groups have had on their local areas.”

The Local Investment Fund originated in 2012, when council published its ambitious £150 million investment programme for the city.

Alderman Rodgers said: “At that time, all of the council’s elected representatives, recognised the need to put in place an investment package for the city in response to the economic downturn.

“That initial investment programme surpassed its original objectives.” It allowed the council in partnership with others to deliver projects worth tens of million including the redevelopment of Belfast Waterfront, or ICC as it’s now known, the £40 million Connswater Community Greenway and the fantastic, HLF supported Tropical Ravine in Botanic Gardens.

” But the capital investment programme is not just about major projects –equally important to us as councillors was investing in local neighbourhoods and helping to regenerate local areas for local people,” added Alderman Rodgers.

He said councillors were determined to ensure the LIF programme delivered tangible results that impacted directly on local areas, building capacity and enabling people to be part of the change they wanted to see.

“LIF was purposely designed to offer comparatively small funding amounts for capital projects. But the impact of these projects is immeasurable. On the face of it, funding may have been used to install a boiler, or fix a roof, but the impact that this has had is what LIF is all about,” Alderman Rodgers said.

“If it has enabled a community group to establish an additional training programme or open a childcare facility, then that is an impact that will be felt by so many people for years to come.

“The value of planting a new garden is priceless when you learn that it is there to support people with dementia. These are the sorts of things that LIF has supported.

“Tonight is a night for celebration, and it’s a celebration that is well deserved,” he added.

Originally LIF was created as a £5 million fund to run from 2012-2015 and it was a result of its success during this period that a second round of funding of £4 million was committed. The establishment of Area Working Groups, enabling councillors from the local area to come together to assess eligible projects meant that LIF funding reached right to the heart of individual communities.

Belfast City Council Chief Executive, Suzanne Wylie, who also attended the event said: “The focus of LIF was to support local community groups and organisations to make a real difference to the lives of local people. The fund for capital projects has been an enabler for groups to allow them to establish new services, enhance the support they offer, or in some cases, mean that they could make their premises watertight, or warm, so that they could continue to operate.

“LIF has supported a wide range of projects in all areas. These have included new builds, refurbishments and upgrade works to existing facilities, enhancements to open spaces, new community gardens and tourism trails, “she added.

“Each of the projects has had a real impact. It’s important to celebrate this success and, as representatives of funding recipients I hope you recognise this and feel proud of what you and your organisations have achieved and the difference you have made to the lives of local people.”