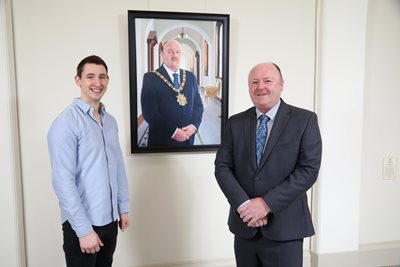 Painted by Co. Antrim artist Stephen Johnston, the portrait will now hang alongside portraits of other previous Lord Mayors in the corridors of City Hall.

Speaking about the portrait, Alderman McCoubrey said: “I am delighted with the result and I really hope that Stephen enjoyed the process as much as I did. The portrait perfectly represents a momentous year in my life, and the immense pride I took in serving Belfast as first citizen.

“2020 was also a year like no other because it will forever be remembered as the year we went into lockdown along with cities across the globe and lives were forever changed by the Covid19 pandemic.

The former Lord Mayor spoke about the detail of the painting and how it depicts memories of the pandemic with the yellow and black warning tape used to help with social distancing, visible on the floor of City Hall.

Alderman McCoubrey said he wanted the portrait to be “instantly recognisable” to City Hall visitors in years to come, showing how the building and wider society had to change and adapt to the pandemic and the resulting restrictions that impacted upon everyday lives.

He also requested that the portrait would give a nod to Northern Ireland’s centenary year and said it was fitting that the artist had included one of the restored Royal Chairs.

“It was particularly special to me to be Lord Mayor of my home city during Northern Ireland’s centenary year, and to be part of that piece of Belfast’s history,” said Alderman McCoubrey.“2021 was an important year in our Decade of Centenaries Programme as we marked 100 years since the formation of Northern Ireland. As part of this, Council conserved two chairs which were used by King George V and Queen Mary at the inauguration of the Northern Ireland Parliament in 1921.

“Stephen suggested including one of the chairs in the background of the portrait and I am so glad that he did. They have been on display in the Council chamber at City Hall for decades and I am honoured that they were restored to their former glory during my time in office.”

Artist Stephen Johnston also holds a special connection with The Royal Chairs. He was the artist commissioned by The Ulster Museum to paint an oil canvas of one of the chairs that now hangs in the museum.

Speaking of his experience Stephen said: “When Frank asked me to complete this project for him, I was both honoured and humbled at such a prestigious task.

“It was important for me from the outset to ensure that the portrait reflected his time as Lord Mayor during what was a very challenging period, and to create a piece that would complement his great love for Belfast and reflect his identity and core values. I thoroughly enjoyed my time spent with Frank and I am really delighted with the finished result.”