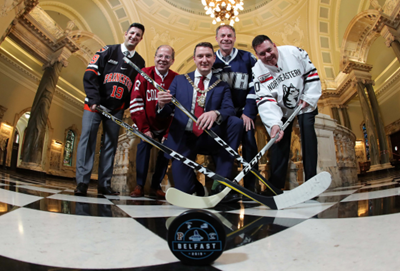 The Friendship Four 2019 hockey tournament is back as the thrill and excitement of American college hockey returns to The SSE Arena, Belfast on November 29 and 30 for the fifth consecutive year.

The Friendship Four 2019 hockey tournament is back as the thrill and excitement of American college hockey returns to The SSE Arena, Belfast on November 29 and 30 for the fifth consecutive year.

The ice hockey tournaments present a unique opportunity for local sports fans to watch the only National Collegiate Athletic Association (NCAA) hockey tournament that takes place outside of the United States. The 2019 tournament consists of a four-game competition which will see talented top-level student athletes from Princeton University, Colgate University, Northeastern University and The University of New Hampshire, compete for the prestigious Belpot trophy.

Over 20,000 spectators are expected to head to The SSE Arena, Belfast to watch the action unfold during America’s culturally significant Thanksgiving holiday period on Friday 29 and Saturday 30 November 2019.

Lord Mayor of Belfast, Councillor John Finucane commented, “Today’s launch marks the start of an exciting few weeks as we get ready to host the fifth Friendship Four tournament. Belfast City Council recognises the strategic importance of this event as it deepens the connections between Sister Cities Belfast and Boston.

"In addition to the competition on the ice, the tournament forges links between our city partners and our American guests to promote Belfast as a place to study, visit and invest in. No doubt the tournament will result in energetic and dramatic sporting action and I hope all those who come in November will develop a lasting bond with Belfast and find many reasons to return!"

Robert Fitzpatrick, CEO of the Odyssey Trust said, “The Odyssey Trust is very proud that the Friendship Four tournament is entering its fifth year of competition and it is an honour to welcome our guests from Princeton University, Colgate University, Northeastern University and The University of New Hampshire. It is a great privilege for Belfast to continue to host the only competitive NCAA games outside of America and we look forward to another fantastic tournament at The SSE Arena, Belfast.”

Friendship Four’s success is manifested in the inclusion of a second women’s competition in January 2020 and the inclusion of a third Conference bringing new contenders for the men’s Belpot trophy in 2020. I am proud that Belfast is attracting such a high level of interest in and from American college sport and look forward to witnessing the high quality of play on 29th November and 30th November in The SSE Arena, Belfast.”

Steve Hagwell from the ECAC Hockey Commission added, “It truly is remarkable that we are set to conduct the fifth annual Friendship Four and second annual Friendship Series in Belfast. Each of the previous events have provided lifetime memories for coaches, student-athlete, staff and visitors.”

The Friendship Four Tournament began in 2015 in support of the Boston and Belfast Sister Cities Agreement which was designed to foster stronger economic development, trade and investment, tourism, cultural exchange and educational linkages between the two cities. To book tickets, go to friendshipfour.com