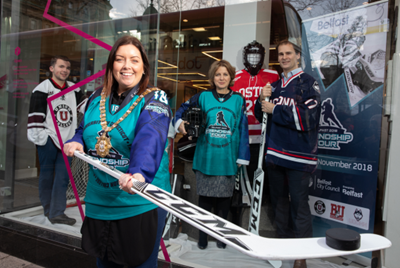 Excitement is building ahead of the fourth annual Friendship Four Ice Hockey tournament, returning to the SSE Arena on 23 and 24 November.

Excitement is building ahead of the fourth annual Friendship Four Ice Hockey tournament, returning to the SSE Arena on 23 and 24 November.

The NCAA (National Collegiate Athletic Association) tournament will see teams from Yale University, Union College, Boston University and University of Connecticut take to the ice to battle it out for the coveted Belpot trophy.

The tournament is a working outcome of the Sister Cities Agreement between Belfast and Boston signed in 2014, which aims to develop economic, trade and investment, tourism, youth, cultural, faith based exchange and educational linkages between the two cities.

Members of the public are welcome to attend the games over the Thanksgiving Weekend. Tickets, including family passes, can be purchased from the SSE Arena box office or from the Friendship Four website. For more information about the tournament, visit www.belfastcity.gov.uk/friendshipfour