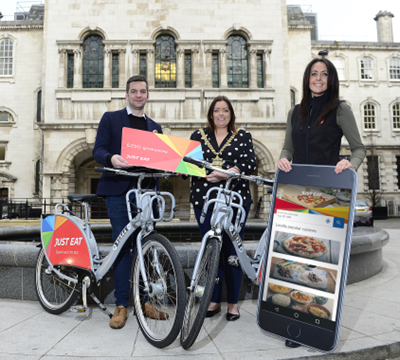 Just Eat Belfast Bikes are offering a tasty treat with a chance to win £250 of vouchers in a photo competition highlighting how the bikes are being used to get around the city during the festive season.

Just Eat Belfast Bikes are offering a tasty treat with a chance to win £250 of vouchers in a photo competition highlighting how the bikes are being used to get around the city during the festive season.

Councillor Hargey said: “The Belfast Bikes scheme has been an outstanding success across the city since its introduction in 2015 and we are delighted that Just Eat, another very successful brand by providing sponsorship for the scheme is recognising that success.

“Since their introduction the number of bike stations across Belfast has increased by one-third – there are now 45 docking stations and the great thing is the partnership with our new sponsor Just Eat will ensure the ongoing sustainability of the scheme and that it remains affordable for all to use.

“There are currently over 16,000 active members registered on the Just Eat Belfast Bike Scheme with over 4,000 joining since April 2018 after we put a new ‘Pay As You Go’ option in place,” she said.

“Journey numbers are increasing with an average of over 19,000 journeys per month bringing the total number of rentals to more than 700,000 since the scheme was launched in April 2015.

“That means there should be lots of opportunities for great photos to come as part of our first Just Eat Belfast Bikes Photo Competition. So get snapping and pick up some tasty bites as well as a fast efficient way of getting round the city,” added the Lord Mayor.

Just Eat UK Marketing Director, Ben Carter said they were delighted to see how the scheme was expanding and he was looking forward to a tour of Belfast on one of the Just Eat bikes.

He said: "We're thrilled to be the new sponsors of Belfast Bikes. With over 100 restaurants in Belfast available on the Just Eat app, collectively delivering thousands of takeaways every week - from sandwiches at lunchtime, to fish and chips on a Friday night - we believe it's important to support local communities around the UK.

“We are delighted that the people of Belfast are enjoying the bikes as much as they do their favourite dishes.

“We are looking forward to seeing the photos of how they are using the bikes for shopping, nights out or as part of their daily commute and choosing a winner or winners to share the £250 voucher,” said Mr Carter.

More information on the competition and how to enter are available on our website www.belfastcity.gov.uk/belfastbikes

Photos can be emailed to