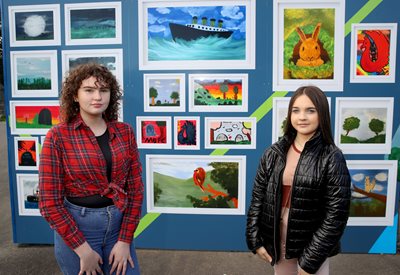 Budding artists from youth groups and primary schools have had their artwork unveiled at Belfast City Cemetery, where a £2.8 million heritage project is underway.

130 children aged between 8 and 16 worked with local artists Frankie Maher and Robert Peters on the project, which involved the young people learning about the history and heritage of the cemetery and producing paintings inspired by it and the notable figures buried within its walls.

The initiative is part of the City Cemetery Heritage Project funded by The National Lottery Heritage Fund and Belfast City Council. It involves construction of a new visitor centre, restoration of some of the cemetery’s key listed assets, installation of new interpretive signage throughout the site, and delivery of an activity programme which aims to attract more visitors.

Councillor Áine Groogan, Chair of Belfast City Council’s Strategic Policy and Resources Committee, said: “There is a wealth of history and heritage within City Cemetery, so it is fantastic that so many young people have been educated through this arts project, while also producing some very impressive paintings.

“Thanks to the investment by The National Lottery Heritage Fund and Belfast City Council in the City Cemetery Heritage Project, we have ambitious plans to attract thousands of additional visitors annually in the years ahead including schools, youth groups, local and international visitors.

“The new visitor centre, along with interpretive signage across the site, will transform how people interact with the cemetery, helping to unlock its many stories. Our outreach and activity plans will also help to increase visitor numbers through regular guided tours, a schools programmes, workshops and volunteering opportunities.”

Paul Mullan, Director of The National Lottery Heritage Fund in Northern Ireland, said: “We are delighted to support the restoration and development of Belfast City Cemetery. Thanks to National Lottery players, this project gives people the opportunity to not only learn about the Cemetery’s rich heritage, but to become truly involved in it. It’s great to see young people exploring the Cemetery’s fascinating history through this new piece of artwork, which hopefully will attract even more visitors to the site.”

Dating back to the 1860s, Belfast City Cemetery is one of the oldest public cemeteries in the city. It is the final resting place of many notable figures including Edward Harland, co-founder of Harland & Wolff; Margaret Byers, suffragist and founder of Victoria College and Sir William Pirrie, chairman of Harland & Wolff and former Lord Mayor of Belfast.

The site also contains many points of historical interest, including the poor ground where over 80,000 souls lie in unmarked graves and an underground wall, which was built in Victorian times to separate Protestant and Catholic graves. The cemetery also has a number of key listed heritage assets including the central steps, Victorian fountain and Jewish Cemetery.