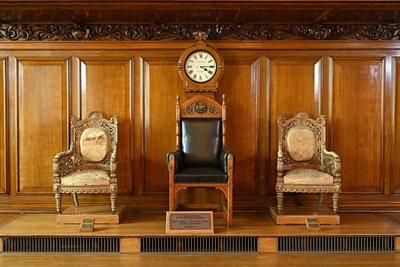 An event, marking 100 years to the day since King George V opened Northern Ireland’s first parliament at Belfast City Hall, will be broadcast live from the iconic building on Tuesday 22 June.

Entitled ‘The King’s Speech’, the event will be broadcast on Belfast City Council’s YouTube channel, starting at 7pm and will feature a reading of King George V’s speech and the unveiling of two chairs used by King George V and Queen Mary during their 1921 visit which have undergone conservation works.

Political historian and broadcaster Dr Eamon Phoenix will give a talk on this period of the city’s shared history, and a new play centred on the King’s speech, developed by Terra Nova Productions in partnership with young people from across the city, will be performed for the first time.

Lord Mayor Alderman Frank McCoubrey said: “This is an important year in our Decade of Centenaries Programme, as we mark 100 years since the formation of Northern Ireland.

“While it is not going to be possible to mark this significant milestone in the way that we had hoped, given the ongoing pandemic and restrictions, I am pleased that people will still be able to find out about this important event in Northern Ireland and Belfast’s history, thanks to the wonders of modern technology.”

The event is part of Belfast City Council’s Decade of Centenaries programme. Funded by the Executive Office, this programme commemorates a decade of key historical moments and events between 1912 and 1922 that shaped Northern Ireland and Ireland during this time.

Council also received funding from the Shared History Fund, which The National Lottery Heritage Fund is delivering on behalf of the Northern Ireland Office, to deliver a number of projects to mark Northern Ireland’s centenary year – including The King’s Speech event and the conservation works on the Royal chairs.

The Royal chairs have been on display in the Council Chamber at City Hall for decades and are a popular talking point with visitors on guided tours of the building.

Alderman McCoubrey added: “The chairs are important artefacts relating to a significant milestone in our history, and it’s fantastic to see them restored to their former glory and protected for generations to come. I think it’s fitting that they will be kept in City Hall so that visitors can continue to learn about their place in history.”

Paul Mullan, Director, Northern Ireland, The National Lottery Heritage Fund, added: “We are delighted to support Belfast City Council through the Shared History Fund, a programme we are delivering to help a wide range of groups mark the Centenary of Northern Ireland in a thoughtful, inclusive and engaging way.