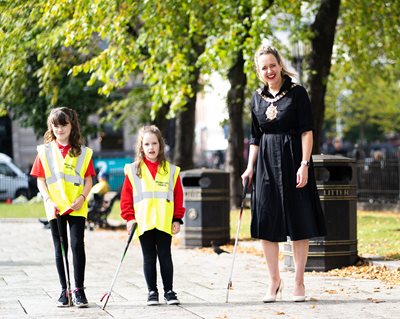 Belfast’s First Citizen has called on people across the city to do #OneWeeThing to help tackle climate change.

It’s part of a new campaign by Belfast City Council to raise awareness of the climate crisis and act as a catalyst for mobilising local action in the run up to COP26.

Lord Mayor Councillor Kate Nicholl said: “Every day, people across Belfast are doing their bit to tackle climate change, in unexpected and small ways. They aren’t politicians or activists, just people who are living life with the planet in mind.

“We want to shine a light on the stories and people who are doing #OneWeeThing to combat climate change, no matter how small or insignificant it may seem because if we come together, those collective efforts can make a big difference.”

Councillor Nicholl is inviting individuals, community groups, schools and businesses to get involved and join the conversation on social media in the hope that it will inspire others to make one simple change to their daily lives.

“The COP26 UN Climate Change Conference in Glasgow in November- the most important environmental summit the UK has ever held – is putting the climate crisis firmly on the agenda and bringing focus to the issue,” said Councillor Nicholl.

“It’s also an opportunity to recognise the work that’s already underway here in Belfast and to celebrate the small wins. The #OneWeeThing campaign aims to recognise the contribution that people are making at a local level – like the litter heroes who organise clean-ups in their communities.

“Recently I met some young people who had taken part in litter picks and we also applauded the efforts of over 120 volunteer-led community clean-ups, supported by Council – just ordinary people who take pride in their communities and want to do their bit for the environment.

“So, if you, or someone you know is a budding environmental changemaker, we want you to get in touch so we can highlight your achievements and build momentum ahead of COP26. Join the conversation on social media, tell us your #OneWeeThing and help us inspire others to follow suit and live life with the planet in mind.”

People can get involved in the campaign by joining the conversation on Facebook and Twitter, using the hashtag #OneWeeThing

To find out more about the campaign and COP26 visit www.belfastcity.gov.uk/cop26