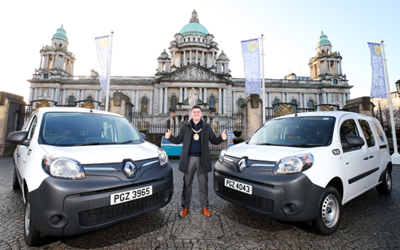 Belfast’s First Citizen has called on people from across the city to help shape action on climate change by sharing their views on Council’s draft resilience strategy.

Belfast’s First Citizen has called on people from across the city to help shape action on climate change by sharing their views on Council’s draft resilience strategy.

The appeal comes today as Lord Mayor Councillor Daniel Baker unveiled new electric vehicles which will be used in parks across Belfast.

Introducing the 12 electric vehicles is part of Belfast City Council’s plans to review its fleet, with long-term ambitions set for transition to low carbon transport options in the future.

Lord Mayor of Belfast Councillor Daniel Baker said: “Climate change has reached a point where we need to make urgent and concerted efforts to understand and prepare for its impact.

“Our goal is to transition Belfast to an inclusive, low carbon, climate-resilient economy within a generation, so there is work to be done.

“Today sees us take another step on that journey with the introduction of these new electric vehicles which will be trialled in our parks.”

Climate is one of three key areas for action in Council’s draft resilience strategy, with children and young people, and connectivity being the other areas of focus.

Councillor Baked added: “Over recent months we have seen young people show strong civic leadership on climate issues; we know that it is something they are concerned about and which has implications for their generation and the next.

“Inaction is not an option and there is a renewed sense of urgency for us to be, not only climate resilient, but resilient as a city to shocks and stresses – both those we can plan for, and those which are unexpected.”

Some of the actions outlined in the draft strategy document include significantly improving levels of tree planting across the city, reducing commuters’ dependency on cars, improving air quality, and developing a ‘green’ policy for the city’s festivals and cultural sector.

As well as the online public consultation, Council will also be hosting a number of engagement events to raise awareness of the resilience strategy in local communities, and with stakeholders including businesses and the community and voluntary and arts sectors.

To find out more, and to share your views on the draft strategy, visit www.belfastcity.gov.uk/resilientbelfast