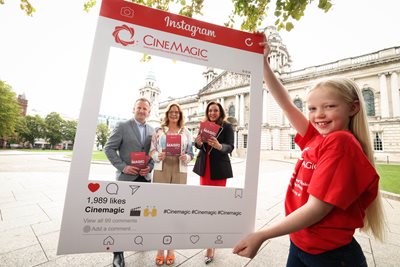 Belfast's 33rd Cinemagic International Film and Television Festival for Young People is set to offer a programme of unmissable opportunities for families, schools, young filmmakers and movie fans this autumn.

The 2022 Cinemagic Festival line-up features film previews from all over the world including Opening Preview Mia and Me: The Hero of Centopia, live action/CGI musical comedy, Lyle, Lyle, Crocodile, based on the best-selling book series, and the adventure-filled world premiere of Future TX introduced by writers and directors, Tim Clague and Danny Stack.

Lord Mayor of Belfast, Christina Black said “Belfast City Council is delighted to continue its support for the Cinemagic Festival in this, its 33rd edition. It’s encouraging to see audience confidence growing again after such a difficult period for our arts organisations. Festivals like Cinemagic are vital to our Belfast Agenda vision to imagine a culturally vibrant city.  Belfast is particularly proud of its film and television industry and this unique festival celebrates this genre and the fantastic talent of our young people, as well as bringing people together from across the community and showcasing what we have to offer.”

Joan Burney Keatings MBE, Cinemagic CEO said “We are extremely excited to present this year’s Cinemagic Film Festival in Belfast - the 33rd edition! After months of hard work amid a difficult landscape for everyone, we are proud to share an uplifting and inspiring programme filled with Talent Labs, Film Previews, Industry Talks, workshops and competitions. As an innovator in the field of youth film exhibition and engagement with the screen industry, we are providing a unique window to the world and celebrating stories from all walks of life. With continued support from our funders Cinemagic can motivate young audiences, nurture skills, and develop tomorrow’s creative workforce. I encourage festival supporters and new audiences to get involved this autumn.”

Island of Lost Girls, a superb family film and intense nature thriller, shot on a remote Mexican island, will captivate audiences who will hear from directors Ann-Marie and Brian Schmidt and meet the cast of young actors. Raffiella Chapman (The Theory of Everything, His Dark Materials), will meet with young filmmakers at her film preview Vesper, the highly anticipated Sci-Fi adventure, in which she stars in the title role.

Blue Peter Editor, Ellen Evans, will host a Q&A about her job looking after the longest running children’s tv show in the world, and Film Critic, presenter and author Ian Nathan will be ‘in conversation’ with Brian Henry Martin about Ian’s latest book, James Cameron: A Retrospective, and Derry Girls Director Michael Lennox will give an insight to working on Channel 4’s hit comedy.

The festival is also looking for CineSeekers Juries, to become young film critics to review animation, drama, and documentary films, and over 150 young filmmakers from the UK and Ireland will be celebrated during the Young Filmmaker Showcase for rising talent.