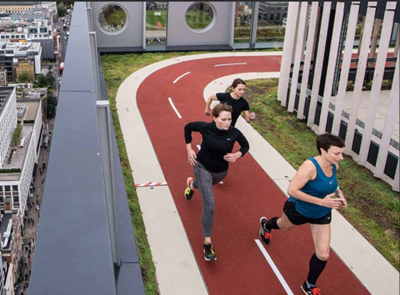 Plans have been submitted to create Belfast’s first ever rooftop running track at The Sixth, the former Belfast Telegraph building, as part of a £75m regeneration plan that places ‘user well-being’ at the centre of a pioneering office and creative workspace development.

On your marks, set and ready to go - ‘The Sixth’ plans to deliver Belfast’s first rooftop running track
Plans have been submitted to create Belfast’s first ever rooftop running track at The Sixth, the former Belfast Telegraph building, as part of a £75m regeneration plan that places ‘user well-being’ at the centre of a pioneering office and creative workspace development.

An application has been submitted this week which details proposals to sensitively restore and refurbish the Grade B2 Listed 1886 ‘Seaver building’ – the former headquarters of the daily newspaper - and to redevelop the remainder of the site with a contemporary, mixed use new build scheme. A total of 230,000 square feet of workspace is proposed across seven floors, with a public atrium and walkway on the ground floor, alongside retail and food and beverage uses.

Councillor Aileen Graham, Deputy Chair of Belfast City Council’s City Growth and Regeneration Committee said:
“The partnership is pleased to have submitted its full planning application for The Sixth. We’ve made a commitment in the Belfast Agenda to growing our city’s economy and positioning the city to compete internationally. Quality, innovative workspace like The Sixth will attract the high-value jobs necessary to grow our economy and help our people reach their full potential. Not only will The Sixth boost the city centre’s vibrancy as part of an emerging creative district, it’s going to breathe new life into one of Belfast’s most loved and iconic buildings.”

At the core of the building’s quality design is a focus on user wellness and wellbeing, an increasingly important consideration for the design of commercial buildings. Stephen Surphlis, speaking on behalf of Bel Tel LLP explained:

“Offices and workspace are evolving and UK and international companies are looking to Belfast and the wealth of talent we have on tap from our universities and within our professional, creative and technology sectors. These firms are placing a premium on employee satisfaction and are seeking working environments that facilitate team interaction, innovation and creativity. Our plans for The Sixth emphasise quality, heritage-led design that makes a contribution to both user wellbeing, and the fabric of our city.

"We’ve engaged world-class architects, Allford Hall Monaghan Morris (AHMM), winner of the 2015 RIBA Stirling Prize and most recently voted Architectural Practice of the Year 2018 by Architects Journal to deliver a unique building that will have a transformative effect on Belfast, by attracting end occupiers who will deliver up to 2,000 high-value jobs.”

Paul Monaghan founding director of AHMM, added:
“The Sixth is a bold project, focused on the experience of its users and mindful of the site’s landmark status and importance as part of Belfast’s built heritage. We have taken cues from the surrounding buildings and the city’s lost Victorian arcades, and will restore features removed or lost from the original listed building. For example, we’re planning to reinstate the building’s main access onto Royal Avenue and re-introduce dormer windows removed from the original roofline.”

“New features such as the roof top running track, roof top terraces and break out spaces compliment the building’s focus on the user. A new public atrium space serves as walkway through the building, which alongside a range of ground floor retail and food and beverage offers will enliven the street level space around Royal Avenue and Donegall Street. The Sixth will contribute to the rapid regeneration of the area and with its close proximity to Ulster University; it will be at the centre of an emerging creative district serving the education, culture, media and technology sectors.

“The Sixth’s design development has been informed by productive discussion and constructive feedback from Belfast City Council Planning Service, Historic Environment Division and other statutory consultees over the past 12 months. We have also been heartened to receive very positive feedback from the public, local business and residents during the pre-application community consultation, and this is reflected in the detail of the application we’ve submitted.”

A full planning application and associated listed building consent on behalf of Bel Tel LLP was submitted by national planning and development consultancy Turley to Belfast City Council and subject to planning approval, work is expected to begin in late 2018.

The Sixth’s project name was inspired by “Sixth Late Tele”, the call of the newspaper’s street vendors when selling the evening edition, which for more than a century was a familiar cry throughout Belfast.