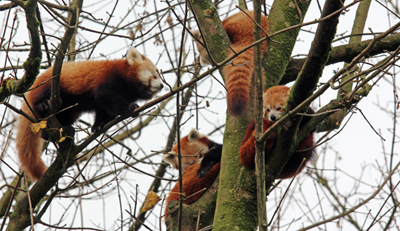 We are pleased to report that the red panda which escaped from its enclosure at Belfast Zoo on Sunday (27 January) has been located.

We are pleased to report that the red panda which escaped from its enclosure at Belfast Zoo on Sunday (27 January) has been located.

It is safe and well and has been returned to the zoo.

The red panda had been reported missing from Belfast Zoo yesterday (Sunday 27 January) afternoon with a sighting first reported around 5.30pm. Belfast Zoo immediately began a search for the animal which continued today (Monday 28 January).

Local residents had been asked to report any sightings immediately to Belfast Zoo and we are grateful to members of the public who assisted with the search.

Red pandas are mainly active from dusk to dawn and often sleep in high trees during the day. Red pandas have a distinctive red fur and long bushy tail, and are slightly larger than a domestic cat.

They feed mainly on bamboo but also fruit, eggs, small birds and insects. Red pandas are native to the Himalayas in Bhutan, Southern China, Pakistan, India, Laos, Nepal and Burma.

They are classified as endangered by the International Union for the Conservation of Nature and are facing a high risk of extinction due to habitat loss and illegal hunting. Belfast Zoo is home to four red pandas.